Go Ahead…Try To Kill Me 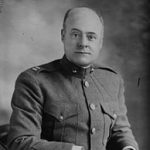 Anthony Joseph Drexel Biddle I (1874–1948) was an eccentric millionaire whose fortune allowed him to pursue theatricals, self-published writing, athletics, and Christianity on a full-time basis. He was the man upon whom the book “My Philadelphia Father” and the play and film “The Happiest Millionaire” were based, but even before that Biddle was eccentric…to say the least. Biddle was a trainer in hand-to-hand combat in both World War I and World War II. In fact, Biddle was an expert in hand-to-hand combat. He also had an unusual way of training his men. It was not unusual for Biddle to tell his trainees to attempt to kill him!! I can’t say for sure that he allowed them to use live ammunition, but he did give them “chance” to try to kill him before he could disarm them.

An officer in the United States Marine Corps, Biddle was an expert in close-quarters fighting and the author of “Do or Die: A Supplementary Manual on Individual Combat,” a book on combat methods, including knives and empty-hand skills, training both the United States Marine Corps in two world wars and Special Agents of the Federal Bureau of Investigation. He was considered not just an expert in fighting, but also a pioneer of United States Marine Corps training in the bayonet and hand-to-hand combat. He based his style on fencing, though this approach was sometimes criticized as being unrealistic for military combat. At one point, when it looked like there was no way out of a drill he assigned to his men…they were surrounding him, and for all intents and 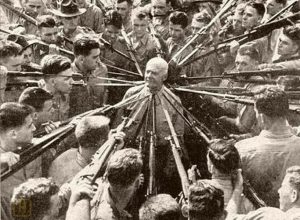 purposes, they had him. Nevertheless, the outcome was not what anyone would have expected, because within in a few minutes, Biddle had completely disarmed each and every one of the men.

Born on October 1, 1874 in Philadelphia, Pennsylvania, to Edward Biddle II and Emily Drexel, Anthony was grandson of banker Anthony Joseph Drexel, and great-grandson of banker Nicholas Biddle. Biddle was a graduate of Germany’s Heidelberg University. He was a fellow of the American Geographical Society and founded a movement called “Athletic Christianity” that eventually attracted 300,000 members around the world. A 1955 Sports Illustrated article called him “boxing’s greatest amateur” as well as a “major factor in the re-establishment of boxing as a legal and, at that time, estimable sport.” He joined the Marines in 1917 at the age of 41, and convinced his superiors to include boxing in Marine Corps recruit training. In 1919, he was promoted to the rank of major, and became a lieutenant colonel in 1934. In Lansdowne, Pennsylvania, right outside of Philadelphia, Biddle opened a military training facility, where he trained 4,000 men. His training included long hours of calisthenics and gymnastics, and taught skills such as machete, saber, dagger, bayonet combat, hand grenade use, boxing, wrestling, savate and jiujitsu. He also served two years in the National Guard. 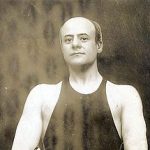 One Response to Go Ahead…Try To Kill Me