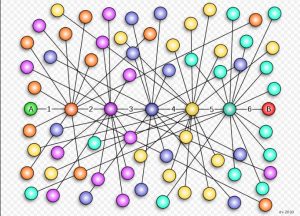 I’m sure that most you have heard of the theory of Six Degrees of Separation, but in case you haven’t, it is the idea that all living things and everything else in the world are six or fewer steps away from each other, so that a chain of “a friend of a friend” statements can be made to connect any two people in a maximum of six steps. I can’t say that I have ever doubted that idea, but I really never gave it much thought really. The idea was originally set out by Frigyes Karinthy in 1929 and popularized in an eponymous 1990 play written by John Guare. It is sometimes generalized to the average social distance being logarithmic in the size of the population. It is all about what a small world it is. That each person is connected to every other person by just 6 steps. It was something I never have given much thought to.

As I became interested in family history, I could see how that could work in the grand scheme of things, with relation. I came across people who were related to me, as well as, being related to my husband. Those relationships had meaning to me and it also made me think about the six degrees of separation that I had heard about years before.

But the reality is that the six degrees of separation never became so obvious to me as last Sunday when my husband had a heart attack. Instantly, we had a group of people around us. Of those people, all concerned for my husband, I knew no one. I only knew that the two women were nurses, and there was a young man who had seen my husband fall. Somewhere in the parking lot was also a woman who knew she needed to pray for him. When we left for the hospital in the ambulance, I thanked the man from across the distance between us in the parking lot, but I still didn’t know his name. I had no idea how I would ever find out who these people were. I knew they were all heroes, and I didn’t know them. Then the six degrees of separation came into play.

First, my husband was saved, and that was a miracle. It was because of 4 people I not only didn’t know, but had now way of finding. They did what they needed to do, and left expecting nothing in return. We owed them so much, and had no way to thank them. Enter the six degrees of separation. I told my husband’s nurse about what had happened, and when her relief came on the next day, she told her about it, and Stephanie, the day nurse already had the first connection for us. The first nurse to help, Ginger, was her sister. And Ginger had the second connection, because she knew the second nurse, Val. Within a few hours, 2 out of the 4 were now known to us. When when I posted about my husband’s miraculous recovery, our friend, Sierra Schamber tagged someone. It was Sean, the young man who helped him first. Then, a woman named Chelsea called her dad to pray. My boss called a prayer partner, who just happened to be on the wife of Chelsea’s dad. I know all those heroes. I think I fully understand the six degrees of separation.