It Makes Him Happy 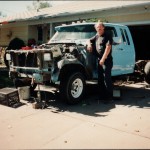 The longer we are married, the more blessed I feel with my soulmate. And…I’m not the only one that is blessed by my husband. Bob is a mechanic…through and through. For years before he had his own garage, we went to his parents house so he could work on cars there. When we bought our current house, it didn’t have a garage either, but it had enough room in back to build one, so we did. It was strange for him to simply have to go out in the back yard to get to the garage where he was working on someone’s car, but it made him very happy. In fact, I can’t think of a “gift” Bob has enjoyed more, or gotten more use out of than his garage. Most people would not even consider the garage to be a gift, but for Bob, it really was. No longer would he have to stand out in the wind and cold to work on a car, or make a trip to his parents’ house to work on a car. He had a place of his own to do that.

Bob has been working on the cars of his friends and family for as ling as I’ve known him. People often ask him, or me, if he ever gets tired of it. The answer is always quick, “No, he likes it. It makes him happy.” Most people want to come home after a long day at work and just relax, but not Bob. There’s lots of time to relax after it get dark. I suppose that Bob is of the “make hay while the sun shines” generation. After a long day at work, Bob would often put in another couple of hours out in the garage. Finally, he found that he had too much to do to waste time going to work anymore. That was a couple of years ago, and he hasn’t changed his mind about that one bit. He likes working for himself much better!!

After his retirement, I think lots of people thought Bob was just going to park in front of the television set and 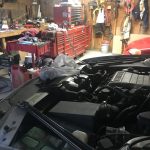 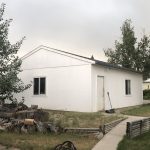 fade away. They were wrong. Bob’s work continued..it just changed locations…and bosses. No he simply walks out the back door to go to “work,” if that’s what you choose to call it. As to his boss, I’ve tried to tell him that I’m his boss now, but he doesn’t believe me. In fact, he seems to think that he is his boss, and I supposed he is right, but I don’t think I’ll ever admit to that. It doesn’t matter anyway, since he is doing what makes him happy…no matter who is bossing him. Today is Bob’s birthday. Happy birthday Bob!! Have a great day!! I’ll love you forever and ever.