Roaring Back To Life 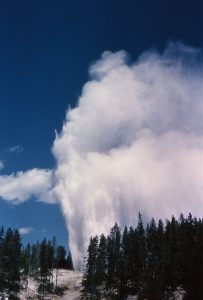 These days, at least in Wyoming, the news is often full of new eruption stories pertaining to Steamboat Geyser in Yellowstone National Park. Steamboat Geyser was dormant from 1911 to 1961. Eleven eruptions were noted between June 4, 1990 and September 23, 2014. Then beginning on March 15, 2018, we have seen a sudden increase in eruptions. Beginning on March 15th, there have been ten eruptions to date…just over three months. That is unheard of for this geyser in recorded history. In reality, it can do what Kilauea has done on Hawaii’s Big Island, only much bigger, because the geyser field in Yellowstone National Park lies on top of an active volcano, with multiple chambers of magma from deep beneath the earth. The same energy that causes geysers to blow could spew an ash cloud as far as Chicago and Los Angeles.

It’s strange to think about the fact that Yellowstone National Park lies on such a huge volcano, and yet three extremely large explosive eruptions have occurred at Yellowstone in the past 2.1 million years with a recurrence 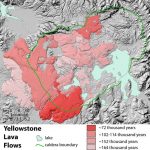 interval of about 600,000 to 800,000 years. More frequent eruptions of basalt and rhyolite lava flows have occurred before and after the large caldera-forming events. It is said that if the Yellowstone volcano erupted again, it it would be catastrophic, but with the chances of a supervolcanic paroxysm being currently around one-in-730,000, it is less likely than a catastrophic asteroid impact. I guess Wyomingites can breathe a little easier. Nevertheless, scientists do want to know what’s behind the most recent activity at Steamboat Geyser. “We see gas emissions. We see all kinds of thermal activity. That’s what Yellowstone does. That’s what it’s supposed to do. It’s one of the most dynamic places on earth,” said Mike Poland, the scientist in charge of the Yellowstone Volcano Observatory.

Steamboat Geyser is the least predictable geyser in all of Yellowstone National Park. It could erupt in five 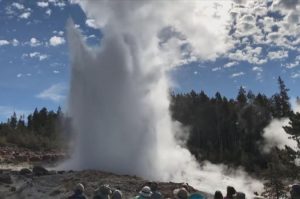 minutes, five years, or even 50 years from now. Yet no one visiting Yellowstone wants to turn away from the sight. “That would be the chance of a lifetime,” one visitor said. “I would be amazed.” Steamboat Geyser,is the world’s tallest and far more powerful than Old Faithful, and right now, it’s roaring back to life. Still, timing is everything, and only a few people get to see it. Poland’s team of volcanologists are using thermal-imaging equipment to track the temperature of the 50-mile-wide magma field. They also monitor 28 seismographs since a super volcano would include major earthquake activity. So far,there is no indication that this is anything other than an unusual series of eruptions, and not indication of increased volcanic activity, which puts many people’s minds at ease. The geyser is welcome to continue erupting, but I say, “Just leave that volcano alone.”