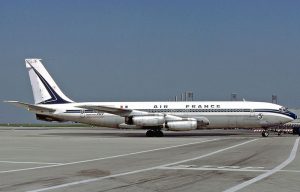 On June 22, 1962, an Air France Boeing 707 crashed on the island of Guadeloupe, killing all 113 passengers and crew members aboard. It was one of five major accidents involving Boeing 707s during that year. In all, the five crashes that year killed 457 people. Crashes happen, and unfortunately, they are not always such an unusual occurrence. Nevertheless, there was a mystery involved here. The Boeing 707 was originally a KC-135 military tanker and bomber. Boeing later decided to modify it to be used for civilian transport, and the finished product was the Boeing 707. The new design proved very popular in the commercial aviation industry. The Boeing 707 was not a fuel efficient as some of the other planes of that era, but it was faster than any other commercial jet at that time, so it made up for the fuel problem with its greater speed.

The airport on the island of Guadeloupe is located in a valley that is surrounded by mountains. Guadeloupe is a part of the French West Indies,located in the Caribbean. This particular airport is not the pilots favorite, because it requires them to make a steep descent just prior to landing. Any problem that occurs in the descent, is very hard to correct, because there is just no time. On June 22, the Air France flight failed to descend correctly and crashed directly into a peak call Dos D’Ane, or the Donkey’s Back. The plane exploded in a fireball; there were no survivors. The flight occurred before the black box flight recorder was invented, so no sure reason for the crash was ever officially found.

This crash was the third deadly crash of a Boeing 707 in a month, so something had to be done. On May 22nd, 45 people died when a plane went down in Missouri and on June 3rd, another Air France 707 crashed in Paris killing 130 people. No evidence was ever found that connected the accidents. It is believed that the weather played a part in the June 22, 1962 crash. The weather was poor in Guadeloupe that day. A violent thunderstorm was in the area, with a low cloud ceiling. Adding to the problem, the VOR navigational beacon 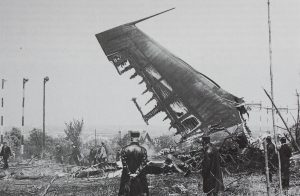 was out of service. The crew reported themselves over the non-directional beacon (NDB) at 5,000 feet and turned east to begin the final approach. That was the last time that anything was “normal” with the flight. Due to incorrect automatic direction finder (ADF) readings caused by the thunderstorm, the plane strayed 9.3 mile west from the procedural let-down track. Moments later, the plane crashed in a forest on the hill called Dos D’Ane, at about 1,400 feet and then exploded. There were no survivors. Among the dead was French Guianan politician and war hero Justin Catayée and poet and black-consciousness activist Paul Niger. While weather played a significant part in the crash, it was not the only cause.