A Different Kind Of Deployment 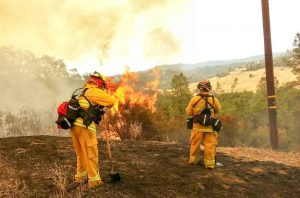 When we think of deployment, we think of the military and of war, but there are other ways to be deployed too, and some of them do not even include the military. Every year, thousands of firefighters are separated from their family members, some of them for months at a time. For the most part, these are wildland firefighters, but sometimes they even have to enlist the help of teams from cities around the country. Wildland fires are not bound by the schedules of humans. Once they get going, they take on a life of their own. Firefighters are in it for the long haul, and many wildland firefighters go from fire to fire, spending the entire fire season far away from their families.

The other night my husband, Bob and I were watching a television program called FireStorm. The show focused on not just what happens during a wildfire, but also on the people who are affected by the fire, that most of us never think about…the firefighters. These are the people who leave their families at home and head out to fight a fire at a moments notice. Some of these people are gone for as much as nine months out of the year, going from fire to fire. These people include the smoke jumpers, the tanker 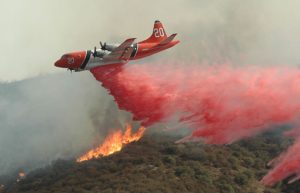 plane personnel, the hotshot units, and sometimes teams from cities in the area, as well as the Bureau of Land Management, and the Forest Service firefighting teams. These people talked about missing everything from school functions to weddings and childbirth. The fires wait for no man, and people depend on these men and women to drop everything and come quickly to try to save their homes.

Smoke jumpers are especially isolated. They jump into a fire area and they are pretty much on their own for up to 3 weeks. The have to pack supplies, tents, and water with them. Part of it is dropped with the smoke jumpers and part of it with it’s own parachute. These firefighters are on their own now…in the middle of the monster. Obviously, they have ways out, but often it is by helicopter. They have to be alert at all times, and there is no time for fun and games. Smoke jumpers are essentially seal teams, when compared to the military. They go out on missions that no one else wants to attempt, and most often, they come back alive too. That is not always the case of course, because some of these teams have been overtaken and killed like the Prineville, 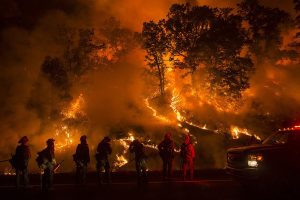 Oregon hotshot team killed on Storm King Mountain in Colorado, when the fire exploded and ran up the hill overtaking them. They paid the ultimate sacrifice for other people in an effort to save lives and homes.

Firefighters who go out for months at a time fighting wildfires all over the country, are truly just as much deployed as their military counterparts, but we seldom think about the family side of their time fighting the fires. The spouses and children, and even parents and siblings, waiting and praying that their firefighter will make it home. It is a different kind of deployment, but it is a deployment nevertheless.