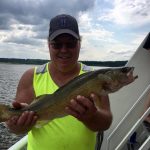 Sometimes, you think you know something about a person, and then you find out how little you knew. I have always known that my brother-in-law, Mike Stevens was a big sports fan. He likes pretty much any sport, and is good at some of them too. He likes hunting and fishing, and camping with his family. These are all things I knew about my bother-in-law, but that is not all there is to Mike Stevens.

Mike likes to garden and takes great pride in his yard looking the best in the neighborhood. Now a lot of guys want their yard to look the best in the neighborhood, but few of them care about the garden, produce or flowers. He plants, tomatoes, peppers and after his son, Garrett moved to Sheridan last summer, and left him with zucchini and cucumber plants, Mike has taken on both of those too. When Garrett had to move he left the plants that he had planted in buckets with his parents, who tended to them the rest of the summer. Some of them made it and some did not. Nevertheless, when Mike had to plant the zucchini in the ground because it got too big for the buckets, Garrett’s plants found themselves adopted. Now, Mike is gearing up to start planting his garden again this year. 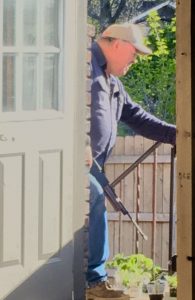 There has been one minor hiccup in the whole process, however, because Mike has had some unwanted visitor’s, in the form of a family of rabbits, in the back yard, that he thinks might decide that that his precious vegetables would make an ideal lunch. So…Mike has become an Elmer Fudd like stalker with his Red Rider BB gun. Every day he get’s his BB gun out and tip toes to the door of the back yard. He get’s his aim and inevitably the “Wascally Wabbit” will hear him and scamper away. I guess Mike and Elmer both have about the same luck with those wabbits. As long as the gun doesn’t blow up on Mike, like it does on Elmer…I guess. That doesn’t make either Mike or Elmer feel better, I’m sure. I know this much, winning against the rabbits is a tough job, and even with screens and fences, those darned rabbits will dig. I guess that the BB gun is his only hope. Today is Mikes birthday. Happy birthday Mike!! Have a great day!! We love you!!