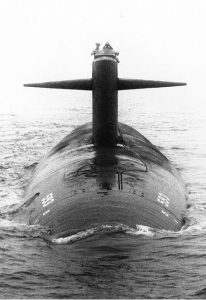 With new technology, always comes some risk of failure. Sometimes, the the failure doesn’t hurt anything, but other times, it can be deadly. In the world of submarines, the atomic submarine was the latest thing in the 1960s. The USS Thresher was launched on July 9, 1960, from Portsmouth Naval Yard in New Hampshire. It was built with the latest technology, and was the first submarine assembled as part of a new class that could run more quietly and dive deeper than any that had come before it. The designers and the Navy expected great things from Thresher, and initially, the submarine met their expectations.

Then on April 10, 1963, at just before 8am, the Thresher was conducting drills off the coast of Cape Cod. At 9:13am, the USS Skylark, another ship participating in the drills, received a communication from the Thresher that the sub was experiencing 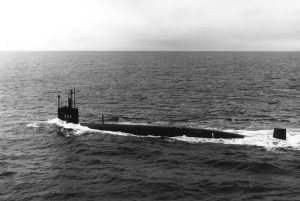 minor problems. Unfortunately, the minor problems turned into a very major problem…almost instantly. Other attempted communications with Thresher failed and, only five minutes later, sonar images showed the Thresher breaking apart as it fell to the bottom of the sea, 300 miles off the coast of New England. Sixteen officers, 96 sailors and 17 civilians were on board. All were killed.

On April 12, President John F. Kennedy ordered that flags across the country be flown at half-staff to commemorate the lives lost in this disaster. A subsequent investigation revealed that a leak in a silver-brazed joint in the engine room had caused a short circuit in critical electrical systems. The problems quickly spread, making the equipment needed to bring the Thresher to the surface inoperable. The submarine went into a freefall to the bottom. There was no time to do anything to stop it or find a way of escape…if one existed. 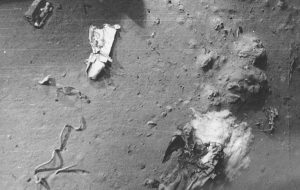 The disaster forced improvements in the design and quality control of submarines. Twenty-five years later, in 1988, Vice Admiral Bruce Demars, the Navy’s chief submarine officer, said “The loss of Thresher initiated fundamental changes in the way we do business–changes in design, construction, inspections, safety checks, tests, and more. We have not forgotten the lessons learned. It’s a much safer submarine force today.” I don’t think there was necessarily anything that was done so wrong that it could have prevented what happened, but I could be wrong. Obviously, there is always room for improvement in any design, but unfortunately, sometimes the only way to know that an improvement is needed, is to have a disaster strike.