Writing Our Own Book

My husband, Bob Schulenberg and I were married at a young age. I wasn’t even out of high school a year when we got married. Today is our 43rd Wedding Anniversary. I’ve heard all the different marriage experts, with all their varying ideas about what makes a perfect marriage, but when I look back on how our marriage lasted all these years, I can’t say that we did many of the things the experts suggested…mostly because they were far fetched and not really us, but also because we didn’t have time for that nonsense. We were busy writing our own book. No, we weren’t literally writing a marriage book, but we were living our life, and in doing so, we discovered that time flew by, as it does when you are having fun, and before we knew it, we had been married 10, then 20, then 30, then 40 years, and now we have arrived at 43 years, and yet looking back, that seems an impossible number. It doesn’t seem like it could possibly be that long. We are among the rare few who have been married once, and have stayed married for more than 40 years. Of course, some people who didn’t make that mark, lost their spouse to death, which doesn’t count really, because they had stayed married until death. Still, we know that divorce is very common in this country, and that somehow we made it. All we knew, 43 years ago, was that we loved each other.

Bob and I have many things in common. After all our years together that isn’t surprising. We have a love for the outdoors and hiking. In fact, while you will find us walking in the mall in the winter, you should know that 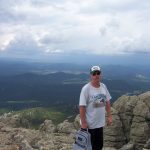 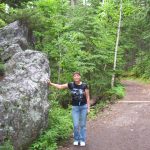 we find that tedious and not relaxing, at least not nearly as relaxing as a trail on a summer evening. We like the same television shows, and some of the same music. We think alike too. I think we could probably finish most of each others sentences. Many of our mannerisms are similar to, because we you are around a person a lot their mannerisms rub off on you. After all these years, we are comfortable with each other, and when you get were we are, you will see just how amazing that is. Today is or 43rd wedding anniversary. Happy anniversary Bob!! I love you with all my heart!!

4 Responses to Writing Our Own Book