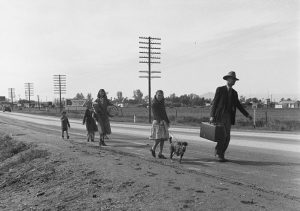 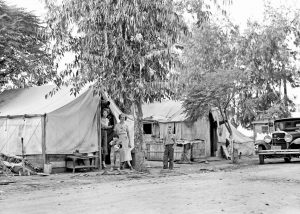 The “Dust Bowl” was an environmental disaster that hit the Midwest in the 1930s. A combination of a severe water shortage and harsh farming techniques caused the disaster. Some scientists believe it was the worst drought in North America in 300 years. The lack of rain killed the crops that kept the soil in place. When winds blew, they raised enormous clouds of dust. It deposited mounds of dirt on everything, even covering houses. With the Dust Bow came the failure of many farms in the Midwest, and the people had no choice but to move, in order to find a way to make a living.

I suppose that the invasion that followed might have been similar to the current refugees. It wasn’t just one family that moved, but hundreds of families. Los Angeles Police Chief James E. Davis, seeking to halt the “invasion” of dust-bowl Depression refugees in February, 1936, declared a “Bum Blockade” to stop the mass emigration of poverty stricken families fleeing from the dust-torn states of the Midwest. These days, he would have met with severe criticism, not so much for the blockade, as for the name of the blockade.

By 1934, 75% of the United States was severely affected by this terrible drought. The region most affected was the Great Plains, and included more than 100 million acres, centered in Oklahoma, the Texas Panhandle, Kansas, and parts of Colorado and New Mexico. These millions of acres of farmland became useless and soon, hundreds of thousands of people were forced to leave their homes. Many of these destitute families packed up their belongings and migrated west, hoping to find work and a better life, about 200,000 of which were California bound. Instead of finding the promised land of their dreams, however, they found that the available labor pool was vastly disproportionate to the number of job openings that could be filled. Migrants who found employment soon learned that this surplus of workers caused a significant reduction in the going wage rate, and even when the entire family worked, they were unable to support themselves.

Many set up “ditchbank” camps along irrigation canals in the farmers’ fields, which brought with them poor sanitary conditions and created a public health problem. And, of those who could find work in agriculture, it did not put an end to their travels. Instead, their lives were characterized by transience, if they wanted to maintain a steady income, which required them to follow the various harvests around the state. In the meantime, California was overwhelmed, trying to figure out how to absorb as many as 6,000 migrants crossing its borders daily. Also feeling the effects of the Depression, California infrastructures were already overburdened, and the steady stream of newly arriving migrants was more than the system could bear. Though these refugees came from a number of states, Californians often lumped them together as “Okies” or “Arkies,” who became the butt of derogatory jokes and the focus of political campaigns in which candidates made them the scapegoat for a shattered economy. They were accused of many crimes, as well as shiftlessness, lack of ambition, school overcrowding and stealing jobs from native Californians.

California’s Indigent Act was passed in 1933, which made it a crime to bring indigent persons into the state, Davis contended that his men needed no special approval because “any officer has the authority to enforce the state law.” Asking border-county sheriffs to deputize his officers, most complied. However, some refused, including Modoc County, who forced 14 LAPD officers to leave after they turned away local residents trying to 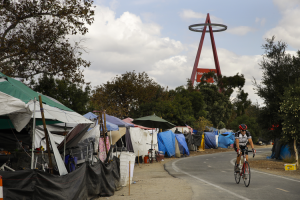 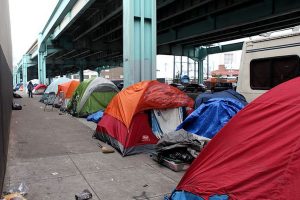 return home. On August 24, 1935, the Los Angeles Herald-Express ran an article warning emigrants to stay away from California. It read: Stay Away From California: Warning To Transient Hordes. Those days were very different from the California of today, and not in a good way. I don’t agree with derogatory name calling, but common sense tells us that sometimes you have to try to stop a flood, even if it’s a flood of people.