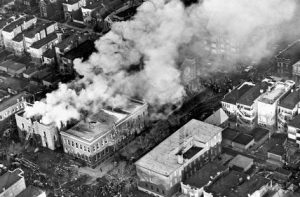 Prior to December 1, 1958, fire drills were not normal procedure, and in fact, were not held at all. No one knew how important fire drills were, even though they knew the dangers of fire, and just how deadly it was. Mainly, they did not realize just how important fire drills were to the safe evacuation of people from a burning building. Prior to that day, when there was a fire, those who knew about the fire ran, and most didn’t think about raising the alarm to let others know. This was especially true in schools, where in reality, fire drills were exponentially more important, because the drill made an emergency seem like just another drill, and could be carried out, before the smell of smoke even arrived in the rooms of the school. Prior to December 1, 1958, the schools had an alarm, but all too often, setting it off was the last thing on the minds of the people in charge…mostly due to their own panic. Later it would be determined that with practice, an emergency situation could be handled, and the people evacuated quickly, if the procedure was simply a practiced maneuver that everyone knew and automatically executed.

So, what led up to the fire drill revelation? Basically, it was due to a fire at a grade school in Chicago that killed 90 students on this day in 1958. Our Lady of Angels School was operated by the Sisters of Charity in Chicago. In 1958, there were well over 1,200 students enrolled at the school, which occupied a large, old building. In 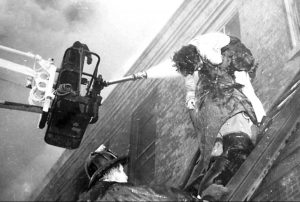 those days, little was done in the way of fire prevention. The building did not have any sprinklers and no regular preparatory drills were conducted. Those two factors combined, led to disaster when a small fire broke out in a pile of trash in the basement, and quickly burned out of control.

It is thought that the fire began about 2:30 pm. Within minutes, several teachers on the first floor smelled it. These teachers led their classes outside, but because it was never practiced, no one thought to sound a general alarm. The school’s janitor discovered the fire at 2:42 pm, and shouted for the alarm to be rung…but by then, at least ten precious minutes had passed since the fire started. Time to evacuate was quickly running out. Unfortunately, the janitor was either not heard or the alarm system did not operate properly. The students in the classrooms on the second floor were completely unaware of the rapidly spreading flames beneath them. It took a few more minutes for the fire to reach the second floor. By this time, panic had overtaken the students and teachers. Some panic stricken students jumped out windows to escape. I can only imagine the horror the firefighters must have felt as the roll up to the scene to find students hanging from the second floor windows, as they ran to try to catch them as they fell. Although the firefighters who were arriving on the scene tried to 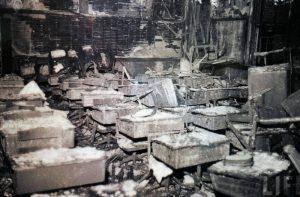 catch them, some were injured. Firefighters also tried to get ladders up to the windows. One quick-thinking nun had her students crawl under the smoke and roll down the stairs, where they were rescued. Other classes remained in their rooms, praying for help. There was no protocol…no routine…and for 90 students and 3 nuns, no chance of survival. Several hours later, when the fire was finally extinguished, the authorities found the 90 students and 3 nuns in the ashes of the classrooms. Sadly, it is the horrific “lessons” that trigger the quickest move to change, and this fire was no different. These days, when students hear the alarm…which is automatic when smoke is detected, they line up, and leave the school in a calm and orderly manner. Fire drills save lives.