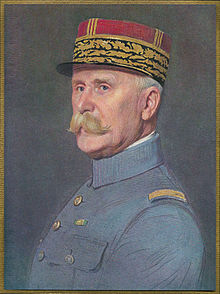 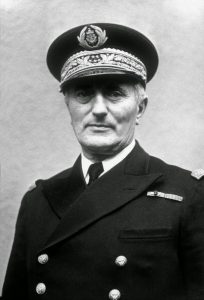 Sometimes, when a war plane is in danger of being captured by the enemy, the pilot might take measures to destroy it, so that the technological secrets don’t end up in enemy hands. In fact, I believe that these days, anytime a plane goes down in enemy territory, the pilots are told to destroy them, but I’m not sure on that.

Strange as that may seem to most of us, on November 27, 1942, something even more strange happened, but I’m getting ahead of myself. In June of 1940, after the German invasion of France and the establishment of an unoccupied zone in the southeast, which was led by General Philippe Petain, Admiral Jean Darlan was committed to keeping the French fleet out of German control. At the same time, as a minister in the government that had signed an armistice with the Germans, one that promised a relative “autonomy” to Vichy France, Darlan was prohibited from sailing that fleet to British or neutral waters. It put him in a rather precarious position, to say the least.

The British were as concerned as the French. A German-commandeered fleet in southern France, so close to British-controlled regions in North Africa, could prove disastrous to the British, who decided to take matters into their own hands by launching Operation Catapult…the attempt by a British naval force to persuade the French naval commander at Oran to either break the armistice and sail the French fleet out of the Germans’ grasp…or to scuttle it. And if the French wouldn’t, the Brits would. If you’ve ever heard the expression, “between a rock and a hard place,” you can picture this situation. And the British tried to push their way in it. In a five-minute missile bombardment, they managed to sink one French cruiser and two old battleships. They also killed 1,250 French sailors. This would be the source of much bad blood between France and England throughout the war. General Petain broke off diplomatic relations with Great Britain.

Two years later, the situation had worsened, with the Germans now in Vichy and the armistice already violated. Admiral Jean de Laborde finished the job the British had started. Just as the Germans launched Operation Lila… 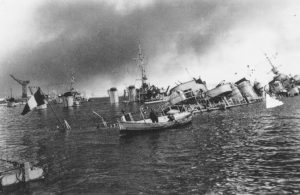 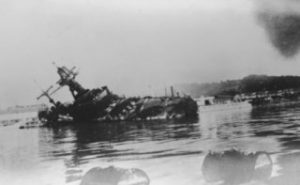 the attempt to commandeer the French fleet, at Toulon harbor, off the southern coast of France, Laborde ordered the sinking of 2 battle cruisers, 4 heavy cruisers, 2 light cruisers, 1 aircraft transport, 30 destroyers, and 16 submarines. Three French subs managed to escape the Germans and make it to Algiers, Allied territory. Only one sub fell into German hands. The marine equivalent of a scorched-earth policy had succeeded.