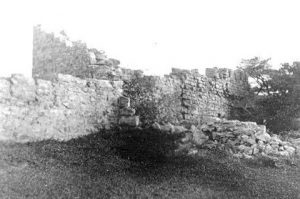 Part of the War of 1812 involved a border dispute between the United States and British North America, which is present-day Canada. During the war, the Americans launched several invasions into Upper Canada, at the point of present-day Ontario. One section of the border where this was easiest, because of communications and locally available supplies, was along the Niagara River. Fort Erie was the British post at the head of the river, near its source in Lake Erie. In 1812, two American attempts to capture Fort Erie were bungled by Brigadier General Alexander Smyth. Bad weather or poor administration halted the American efforts to cross the river, and Fort Erie remained in British hands.

In 1813, the Americans won the Battle of Fort George at the northern end of the Niagara River. At this point, the British abandoned the Niagara frontier and allowed Fort Erie to fall into American hands without a fight. Unfortunately, the Americans failed to follow up their victory, and later in the year they withdrew most of their soldiers from the Niagara to furnish an ill-fated attack on Montreal. This allowed the British to recover their prior positions and to mount raids which led to the Capture of Fort Niagara and the devastation of large parts of the American side of the Niagara River.

For 1814, a new invasion of Upper Canada was planned under the command of Major General Jacob Brown. Originally aimed at Kingston on Lake Ontario, it was switched to the Niagara because British ships controlled Lake Ontario for the first six months of 1814. The United States finally captured Fort Erie in 1814. It was thought that the British, while outnumbered, surrendered Fort Erie prematurely…at least in the view of the British commanders. They fully expected the outnumbered British troops to stand and fight…to the death, if need be. Because American troops were already concentrated at Buffalo and Black Rock, the attack was to be launched across the southern part of the Niagara frontier. Fort Erie was the first objective that stood in the way, and so, its capture was required. Lieutenant General Gordon Drummond, the British commander in Upper Canada, hoped that the garrison at Fort Erie could at least buy him enough time against the American invasion to concentrate his forces. Major Thomas Buck was given command of the fort with a garrison of 137 British soldiers.

Brown’s force crossed into Canada on July 3, 1814. Brigadier General Winfield Scott landed a mile and a half north of the fort with a brigade of regulars while it was still dark. Another brigade under Eleazar Wheelock Ripley crossed the head of the river to the south of the fort, a little behind schedule due to fog. Meanwhile, New York militia demonstrated opposite Chippewa to distract the British troops in the area. As Scott’s and Ripley’s forces approached Fort Erie, Buck fired only a few shots at the Americans from the fort’s cannon and then surrendered. The Americans had captured an important fort at little cost. The fort’s garrison had bought the British very little time and Buck was later court martialed for his hasty surrender.

From their new base at Fort Erie, Brown next marched up the Niagara River and met the British at the Battle of Chippewa. The British commander at Chippewa, Major General Phineas Riall, believed that the garrison of Fort Erie was still holding out, which contributed to his decision to launch a hasty and ill-fated attack. Following the Battle of Lundy’s Lane in July, British forces under the command of Gordon Drummond advanced and unsuccessfully attempted to besiege the fort. After that it remained in American hands until the American commanders decided to abandon the fort, which was evacuated and blown up in November 1814. These days, with so many historic forts across the nation, it was shocking to me to read that they had blown up the fort, 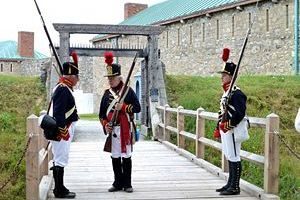 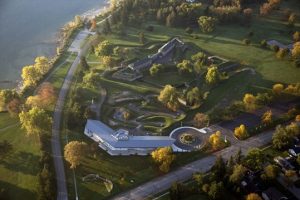 but I guess they weren’t interested in the historic side of things…they were making history. The fort, which had been built by the British in 1764, was restored, and was incorporated as a village in 1857. It became a town when it merged with Bridgeburg in 1932. Fort Erie is now the site of a large horse-racing track and has steel, aircraft, automotive, paint, and pharmaceutical industries. It is a town with a population of 29,960 in 2011.