Fire Fell From The Sky 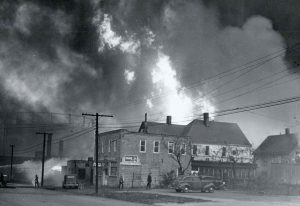 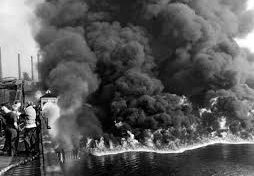 On October 20, 1944, in the city of Cleveland, Ohio, workers at the East Ohio Gas Company spotted a white vapor leaking from the large natural gas tank at the company plant near Lake Erie. It was 2:30 pm on that Friday afternoon, and a leak is never a good thing, but this one would prove to be disastrous. The circular tank had a diameter of 57 feet and could hold 90 million cubic feet of the highly flammable gas. Ten minutes later, a massive and violent explosion rocked the entire area. Flames went as high as 2,500 feet in the air. Everything in a half-mile vicinity of the explosion was completely destroyed. In the ensuing explosion, a smaller tank also exploded. The out-of-control fire that followed the explosion necessitated the evacuation of 10,000 people from the surrounding area.

Originally built in 1902, the East Ohio Gas Company plant, spanned from East 55th to East 63rd Streets taking up a full ten acres. It provided natural gas to most of Cleveland, including many businesses in the neighborhood in which it was located. By 1940, part of the plant was converted to a liquefaction, storage, and regasification facility, which was one of the most modern gas plants in the country, safely storing large quantities of liquefied gas in four separate holding tanks. These days, we would not have these types of volatile substances stored in a residential area, but back then, before transportation became much more affordable, laborers in those early industrial cities had to be close to their places of employment. A gas storage facility was just one among many industrial operations that were located in a typical working-class neighborhood of that era. However, because the plant was modernized and had many safety features, people living in the area felt they had no reason to fear. That is, until a fateful day in October when “fire fell from the sky.”

The call went out to every firefighting unit in the Cleveland area. It took all of the city’s firefighters to bring the horrific industrial fire under control. In the end, the fire killed 130 people, destroyed two entire factories, 79 homes in the surrounding area and more than 200 vehicles. The total bill for damages exceeded $10 million. When the fire was out, rescue workers found that of the 130 people, killed by the blast, nearly half of the bodies were so badly burned that they could not be identified and in fact, 21 of them were never identified. Two hundred and fifteen people were injured and required hospitalization. The cause of the explosion had to do with the contraction of the metal tanks. The gas was stored at temperatures below negative 250 degrees and 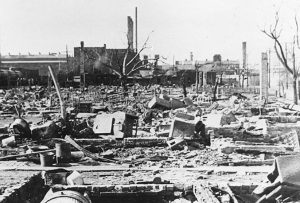 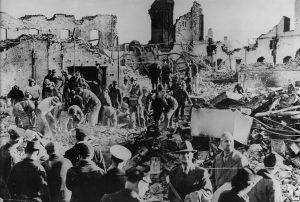 the resulting contraction of the metal had caused a steel plate to rupture. The East Ohio Gas Explosion has since been calculated to be equal to a 2.43 kiloton TNT explosion or 1/6 of the Hiroshima Atomic Bomb. In the aftermath of the fire, everyone knew that changes had to be made to protect laborers, and the people in the neighborhoods. Newer and far safer techniques for storing gas and building tanks were developed in the wake of this disaster.