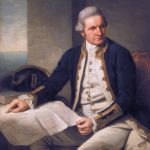 While visiting Alaska a few years ago, Bob and I kept hearing about Captain James Cook. I suppose I had probably heard a little about him at one point or another during my school years, but as often happens with kids, I wasn’t really interested…at least not until I saw Alaska for myself. Then, the places that were discussed in history actually came to life, because I was there in person. In reality, Captain Cook had a direct impact on several areas of the west coast of the United States, including the Puget Sound in Washington and areas of Oregon. Cook’s two ships, the Discovery and Resolution, had worked their way northwest from what is now Oregon and Puget Sound, along the British Columbia and Alaska coast, hoping to find the long sought after Northwest Passage to Europe.

In early June 1778, Captain Cook and his men were in the Cook Inlet, hoping it would lead to the imagined passageway to Europe. It didn’t, of course, but once again Cook sent his crew exploring in small boats. Their adventures there led to the naming of Turnagain Arm, which Captain Cook originally called River Turnagain. It was so named because it was a disappointing “turn again” for Cook’s crew. The problem they were having was because Turnagain is subject to climate extremes and large tide ranges. During high tide, taking a boat in is simple, but if you don’t get out before low tide, you will find yourself fighting the quicksand-like mudflats that make up the beaches along Turnagain Arm in low tide.

In the times that Captain Cook was exploring for England, it was customary to name places after places and people in England. The visit to Cook Inlet was part of Cook’s longer exploration of the Alaska coast from which included a stop in Prince William Sound, which Cook named, along with Bligh Reef in the Sound. Bligh Reef would become famous in 1989 when the tanker Exxon Valdez ran aground on it and spilled millions of gallons of crude oil. Prince William Sound, interestingly, was almost named “Sandwich Sound” by Cook after the Earl of 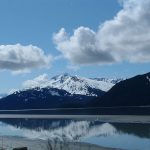 Sandwich in England, and who also, by the way, invented the sandwich as a food item. The Sound was renamed by Cook after Prince William, a descendent of the royal family when his journal was published. Leaving Prince William Sound, Cook ventured west along the Alaska coast to explore further, and after leaving Cook Inlet, he named Bristol Bay after Admiral Earl of Bristol, and Norton Sound after Sir Fletcher Norton, then Speaker of the British House of Commons. As he continued his quest for the Northwest Passage, Cook entered the Chukchi Sea through the Bering Strait and, amazingly, got as far as Icy Cape, on Alaska’s northwest coast, before being stopped by ice. In fact, the two ships were almost trapped by ice the off of Icy Cape.

During his travels, Captain Cook named many other places, including Mount Edgecumbe and Cape Edgecumbe after George, Earl of Edgecumbe. He broke from protocol in naming Mount Fairweather and Cape Fairweather, using the fact that he had good weather at the time of his exploration, as inspiration for the names. Cross Sound was so named because he found it on May 3, designated on his calendar as Holy Cross day. Cape Suckling was named after Maurice Suckling, comptroller of the Royal Navy when Cook left England. Controller Bay was probably also named after Maurice Suckling, but the Russians translated the name to Zal Kontrolyer on the Hydrogaphy Department Chart 1378, dated 1847, and so it remained Controller Bay. Cape Hinchinbrook was named after Viscount Hinchinbroke. Snug Corner Cove was so named because Captain Cook thought, “And a very snug cove it is.” Montague Island was named after John Montagu, Earl of Sandwiche, the son of Viscount Hinchinbroke. The list of names and their origins goes on and on, but I find these the most interesting.

During his third visit to the Sandwiche Islands, which we now know as Hawaii, Captain James Cook lost his life 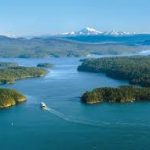 in a mob fight with the Hawaiian natives, who wanted one of his boats. As the men came ashore, the Hawaiians greeted Cook and his men by hurling rocks at them. They then stole a small cutter vessel from the Discovery. Negotiations with King Kalaniopuu for the return of the cutter collapsed after a lesser Hawaiian chief was shot to death, and a mob of Hawaiians descended on Cook’s party. The captain and his men fired on the angry Hawaiians, but they were outnumbered. Only a few managed to escape to the safety of the Resolution. Captain Cook was killed by the mob on February 14, 1779. A few days later, the Englishmen retaliated by firing their cannons and muskets at the shore, killing some 30 Hawaiians. The Resolution and Discovery eventually returned to England.