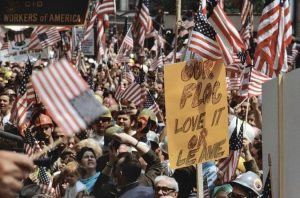 These days, patriotism seems to be constantly under fire. The nation has basically taken sides on the issue. There are those who hate this country and all it stands for, and those who love this country despite its faults and any negative historical events. I am a patriot, and it is my belief that history is history, mistakes and all. It can’t be changed by tearing down a few statues, and certainly not by stomping on our flag. The patriots of this time feel the same as the patriots of the Vietnam era…”Our Flag, Love it or Leave.” I find it strange to think that this era is really no different than that era, or any other era of American history, or in fact, in the history of any nation. There are those who love their nation and are loyal to it, and those who tend to blow with the wind…only showing faithfulness when it suits their own agenda. In my opinion and the opinion of every patriot, these people who turn on our country just because things aren’t going their way, are traitors, and should be treated as such.

There have been a number of traitors in our nations history, and I’m sure there will be many more, but one of the most famous of them all was Benedict Arnold. On this day in 1780, during the American Revolution, an American General named Benedict Arnold met with a British Major named John Andre to discuss the treasonous act of handing over West Point to the British. In return Arnold was promised of a large sum of money and a high position in the British army. The plot was foiled and Arnold, who was once considered an American hero, became synonymous with the word “traitor.” Benedict Arnold was not always a low life traitor. He was actually 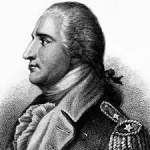 born into a well-respected family in Norwich, Connecticut, on January 14, 1741. He apprenticed with an apothecary and was a member of the militia during the French and Indian War from 1754 to 1763. Later, he became a successful trader and then joined the Continental Army when the Revolutionary War broke out between Great Britain and its 13 American colonies in 1775. When the war ended in 1783, the colonies had won their independence from Britain and formed a new nation…the United States.

During the war, Benedict Arnold proved himself a brave and skillful leader, helping Ethan Allen’s troops capture Fort Ticonderoga in 1775 and then participating in the unsuccessful attack on British Quebec later that year, which earned him a promotion to brigadier general. Arnold distinguished himself in campaigns at Lake Champlain, Ridgefield and Saratoga, and gained the support of George Washington. However, Arnold also had some enemies within the military and in 1777, five men of lesser rank were promoted over him. I see that there were those who were not fooled by his presumed loyalty. Over the course of the next few years, Arnold married for a second time. He and his new wife lived a lavish lifestyle in Philadelphia, accumulating a large amount of debt. The debt and the resentment Arnold felt over not being promoted faster were the motivating factors in his decision to become a turncoat.

In 1780, Arnold was given command of West Point, an American fort on the Hudson River in New York, and future home of the United States military academy, which was established in 1802. Arnold contacted Sir Henry

Clinton, head of the British forces, and proposed handing over West Point and his men. On September 21, 1780, Arnold met with Major John Andre and made his traitorous pact. Thankfully, the conspiracy was uncovered and Andre was captured and executed. Arnold, the former American patriot turned traitor, fled to the enemy side and went on to lead British troops in Virginia and Connecticut. He later moved to England, though he never received all of what he’d been promised by the British. He died in London on June 14, 1801, having never realized the greatness he thought he would achieve. Now, when people think of a traitor, they often call them a Benedict Arnold. It is a huge insult to be called that.