Making Music With My Friends 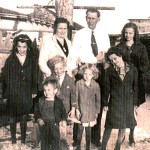 There is an old song, that Willie Nelson wrote in 1980, called On The Road Again, and one part of the lyrics goes like this, “The life I love is makin’ music with my friends.” That line reminds me of a story I heard about my Uncle Larry Byer. My Grandma Byer’s house was the place to be when all the kids were home. There were always kids hanging out there, and because of the varied ages of the siblings, the ages of the visiting children varied quite a bit too. The family had always loved to sing, and several among the family members played an instrument. Grandpa Byer played the mandolin and the violin. Uncle Larry played the guitar and the mandolin, as well as the piano. My dad, Allen Spencer, and Uncle George Hushman also joined in with guitar and singing. It was like a big jam session. For the kids, like my Aunt Sandy Pattan, those jam sessions were like a big party.

Uncle Larry always had a group of friends who loved to hang out at the house…among them Bobby Boatman, Caryl Sparger, and Gene Tholl. They and the rest of the gang played music and just had a good time in general. Aunt Sandy even told me that they had a machine that recorded the songs and put them on a record. They would hang blankets to make a sound room and record their own songs. I sure wish some of those old records were still around. I would love to hear my dad, grandpa, uncles, and their friends singing and making music with their friends. One of the songs that Uncle Larry used to play for Grandma…his mom…was her favorite, “Springtime in the Rockies.” Grandma loved that song, loved hearing him play and

sing it. It was a song Grandpa always sang to her, so it had a very special meaning. I’m sure it was a sweet love song to her from Grandpa.

Aunt Sandy told me that when Uncle Larry went into the Army, she really missed him, like most little sisters would. She missed his joking ways, all the friends who came over, and especially, she missed those jam sessions. Nevertheless, when he came home, it wasn’t those things that Aunt Sandy was thinking about. Her big brother was home and all she could think of was to run into his arms for a great big hug. Today would have been Uncle Larry’s 83rd birthday. Happy birthday in Heaven Uncle Larry. I can’t wait to see you again, and get one of those great big hugs too. We love and miss you very much.