Recently, I heard a saying that has really made me think. “We take photos as a return ticket to a moment otherwise gone.” The thing about that thought that struck me the most, was when I considered moments otherwise gone…forever. I have always loved photography. From the time I was a little girl and received my first camera, I was hooked. There were years I wasn’t so good about taking pictures, and mistakes I made, such as not including people in my photos enough, not writing down the names of people and the locations, and the biggest one in my mind, not being in the pictures enough. So many people these day take selfies, and then there are the selfies that are ridiculed because “the person takes too many selfies.” I suppose that can be an issue, but when you think about it, they will always have that moment, and if that selfie made them look and feel especially pretty or handsome, so much the better. It is a moment, frozen in time…a memory that will always be with them.

When I look back at the funerals of my parents and my father-in-law, and the slide shows we did for them, I 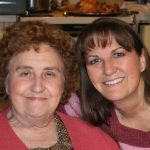 found myself amazed that I was having trouble locating pictures of me with them…particularly with my dad. It was a strange thing for me to realize that, until I thought about how much time I spent behind the camera and not in front of it. Since that time, I have made sure to take those pictures of my mom and me, my father-in-law, and me, and my mother-in-law and me, because I want to have those return tickets to those precious moments of the past. It’s not just about the slide show either, although that is a permanent memory of their lives, but it’s about the time spent with them. In his last two years, my dad and I spent many hours together, while I was one of his caregivers. I got to enjoy his wonderful sense of humor, as we teased each other every day. In my memory files, I can see him pretending to be asleep when I came in. Then, I would softly flick his hand, and he would accuse me of hitting him, saying, “Oh!! You struck me!” Then we would both laugh about it, because we knew that in a million years, that would never have happened. We pretended to argue, as I dressed his wounds, and helped him get dressed. Then I would step out while he finished the process, and he would come out into the living room. Whenever I am in their house, I can see those moments as vividly as if they were still there. Still, there are many moments that aren’t quite as clear, and a picture would tell the story 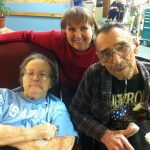 so well. And now that it is too late to take them, I really wish I had some of those moments in pictures.

There are countless people who tell me how much they hate having their picture taken. I find that really sad, because it isn’t about them. They are denying others the right to have a return ticket to those precious moments. So few people think about it that way…until the day when they really wish they had a picture of them with someone special. That’s when it finally hits them. Pictures aren’t just something silly to post of Facebook. They are memories. They are return tickets to a moment otherwise gone. I think I’ve improved on those return tickets quite a bit, and for that, I am happy.