Dinner With The President 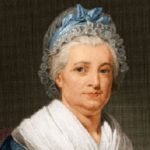 When we think of dinners with the President of the United States, we think of state dinners with tons of security, and massive pre-planning. Presidential dinners have changed distinctly since Washington’s day. The nation was much smaller for sure, and he could easily get together with all of his advisors and Congress in one place, I’m sure. In fact, George Washington was basically in uncharted waters. So, he decided that on Thursday evenings, he would have the brightest minds in the nation over for a casual dinner. At that time the nation’s capitol was still in New York City, so those casual dinners were never held in the White House. George Washington and his family lived in executive mansions in lower Manhattan, which was close to other governmental buildings in that era. While Washington entertained foreign dignitaries and other heads of state at public receptions on Tuesdays and Martha Washington regularly invited guests to their home on Fridays, Thursday evenings were reserved for formal dinners with congressional leaders, their wives and close personal friends of the Washingtons.

In reality, these dinners were elaborate affairs. They started promptly at 4:00pm, because Washington refused to wait for latecomers. I guess every president has his own idiosyncrasies. The parties numbered up to two dozen people, gathered around a table set with the Washington family silver and china. Unlike some state dinners, in which the President and his wife occupy the head of the table, Martha Washington preferred to sit in the middle of one side of the long table and President Washington sat directly across from her. The ends of the table were occupied by a secretary to help with the conversation and roast carving. The roast carving was necessary too, because there were a lot of roasts to be carved. The dinners were comprised of three courses, but that did no limit the selection. There would commonly be upwards of twenty different dishes in each course…all of which were brought to the table at the same time.

The various dishes were the finest that New York had to offer, and the guests were lavished with the exquisite meals. Manhattan was in the middle of New York City, but in 1700, it was still quite wild. The island had an assortment of venison, rabbit, and duck that were hunted for food. Oysters were abundant in the Hudson River. Jellies, dried fruits and nuts were served alongside, although you wouldn’t have seen potato or tomato dishes, because those foods were regarded as unfit for humans to eat in those days. Wine was drunk with dinner, although George Washington was said to prefer a tankard of ale over a glass of claret. 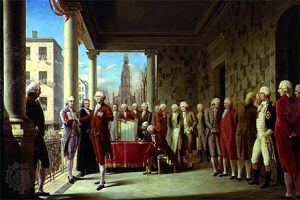 When dinner was over, Washington would raise a toast to the assembly, and then the ladies would retire to Martha’s drawing room for “coffee and civilized conversation.” The gentlemen would remain in the dining room, lingering over cigars and wine, but not for very long. The president only stayed another thirty minutes before joining the women in the drawing room. One of his personal secretaries would stay on in the dining room with the men to preside over political chats for another hour or so, until the company left and the Washingtons’ Thursday dinner was over…until the next week. George Washington passed away on this day, December 14, 1799.