The Captain of Köpenick 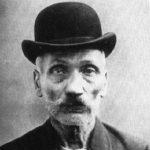 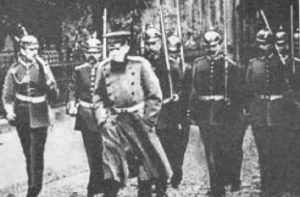 Have you ever been an accomplice to a robbery? Would you ever? No…are you sure? I’m sure that’s what a squad of German soldiers in 1906 thought too, but they were wrong. In fact, I’m sure that those soldiers never dreamed that it could happen to them.

On this day, October 17, 1906, German shoemaker, Wilhelm Voigt, aged 57, had a plan. Voigt dressed up as a German Army officer, walked up to a squad of German soldiers in Tegel, Germany and told them to follow him. Voigt, who had a long criminal history, exploited the soldiers blind obedience to authority, and got them to assist him in his outlandish robbery. Tegel is a suburb of Berlin, but Voigt took the men 20 miles to the town of Köpenick.

After lunch, he put the men in position and stormed into the mayor’s office. Declaring that the mayor was under arrest, Voigt commanded the troops to take him into custody. He then demanded to see the cash box

and confiscated the 4,000 marks inside. The mayor was put in a car, and Voigt ordered that he be delivered to the police in Berlin. On the way to Berlin, Voigt managed to disappear with the money. Still, it took more than a few hours at the police station before everyone realized that it was all a hoax. While 4,000 marks might not seem like very much, it would total about $62,000 in US currency today, so it wasn’t just a petty theft.

The caper was a huge embarrassment to the German Army, but the Kaiser thought the story was quite funny. The Army put together a massive manhunt, and found Voigt in Berlin a few days later. He was given a 4 year sentence for the theft, but the Kaiser pulled some strings and reduced the sentence to two years. Somehow, Voigt wound up being a folk hero for the rest of his life. He started wearing his uniform and posing for pictures for years. He was known as the Captain of Köpenick. I don’t suppose that the men and women in our Army today would think that they would be fooled in such a fashion, but seriously, if someone wearing a proper captain’s uniform said to follow him, I have to wonder just how many of today’s soldiers would dare to disobey that order.

2 Responses to The Captain of Köpenick