Hot air balloons have been around for a long time, and there have been multiple uses for them. Hot air balloons have been used for everything from travel, recreation, escape, war, and even spying. It was the latter reason that brought President Abraham Lincoln to a field outside Washington DC on October 4, 1861. Those were tumultuous years, with the Civil War in full swing, and both the Confederate and the Union armies were experimenting with the idea of using hot air balloons to gather military intelligence. It was probably a good idea, but there was enough danger involved with this idea, that it proved to be impractical in most situations.

I don’t think most people who were presented with the idea of using hot air balloons in a war situation, were very sold on it. Several firms had been talking to the War Department about balloons, but Thaddeus SC Lowe, who had been working with hydrogen balloons for several 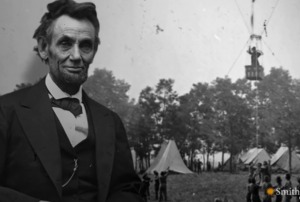 years, and was convinced that they could be a useful tool for collecting intelligence, was the primary figure in that quest. He had conducted trials in April 1861 near Cincinnati, Ohio, with the support of the Smithsonian Institution. On April 19, 1861, he took flight for a trip that would take him to Unionville, South Carolina, where he was immediately jailed by the Confederates, who were convinced that he was a Union spy.

In the end, Lowe had it right. The hot air balloon could be instrumental in winning a war. He became the head of the Union’s Balloon Corpsin 1861 and served effectively during the Peninsular campaign of 1862. With the views provided from his balloon, Lowe discovered that the Confederates had evacuated Yorktown, Virginia, and 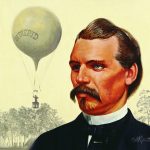 he provided important intelligence during the Battle of Fair Oaks, Virginia. He had a good working relationship with George McClellan, commander of the Army of the Potomac, but had difficulties with McClellan’s successors. Generals Ambrose Burnside and Joseph Hooker were sadly not convinced that balloon observations provided accurate information. I guess they just didn’t have the same vision as Lowe had. Lowe became increasingly frustrated with the army, particularly after his pay was slashed in 1863. Feeling that army commanders did not take his service seriously, Lowe resigned in the spring of 1863. The Balloon Corps was disbanded in August of that year. Lowe later became involved in building a railway in California. He died there in 1913 at age 80.