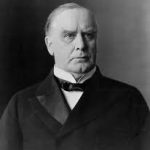 I find it very sad to think that if a person had some ailments or injuries in this day and age, they would likely have lived through the episode, but in days gone by, and for President McKinley, that was not to be the case.

On September 6, 1901, while standing in a receiving line at the Pan-American Exposition in Buffalo, New York, McKinley was approached by Leon Czolgosz, a Polish-American anarchist carrying a concealed .32 revolver in a handkerchief. Czolgosz shot McKinley twice at close range. One bullet deflected off a suit button, but the other entered his stomach, passed through the kidneys, and lodged in his back. When he was operated on, doctors failed to find the bullet. That in and of itself was a very 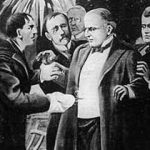 serious situation, but I believe it would have been survivable. Unfortunately for President McKinley, the doctors of that time had few, if any antibiotics to fight infection, and gangrene soon spread throughout the president’s body. McKinley died eight days later, on September 14, 1901. Czolgosz was convicted is of murder and executed soon after the shooting.

These days, there have been a number of people who have had injuries far more grave than President McKinley had, and yet they have come through with flying colors. I think it is irrelevant what a person’s politics are or whether you think President McKinley was a good president or a bad president, because this really isn’t about politics at all. The reality is that this man died largely because of a lack of modern medicines that could 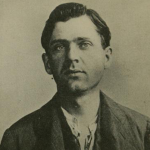 have easily cured the gangrene he had from the shooting, or in most cases, prevented it all together.

None of us likes to pay for the cost of some of the life-saving drugs that have been developed, but it is partly that cost that helps to pay for the research that goes into these new medicines. Whether we pay for them by donations before development or cost after development, really makes no difference. I know many people think that the drug companies gouge the patient, and I suppose that could be true to an extent, but which one of us has what it takes to find a medicine that cures some of the diseases we can cure today, that were a death sentence in years gone by?

2 Responses to A Death Sentence