The Nation Of Frankland 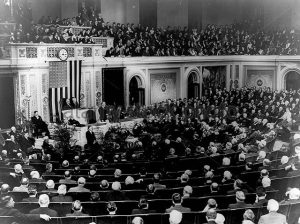 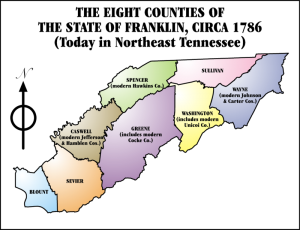 Have you heard of the nation of Frankland…or maybe the nation of Franklin? I hadn’t either, but it was a real place. Early in the history of the United States, its people operated on somewhat limited trust of the government…probably due to the treatment they received in England. In April of 1784, the state of North Carolina ceded its western land claims between the Allegheny Mountains and the Mississippi River to the United States Congress. The settlers who lived in that area, known as the Cumberland River Valley, had already formed their own government from 1772 to 1777, and their distrust of Congress led the to worry that the area might be sold to Spain or France to pay off war debts owed them by the government. Due to their concerns, North Carolina retracted its cession and started to organize an administration for the territory.

At the same time, representatives from Washington, Sullivan, Spencer (modern-day Hawkins) and Greene

counties declared their independence from North Carolina. Then, in May, they petitioned the United States Congress for statehood as Frankland. The simple majority favored the petition, but Congress could not get the two thirds majority to pass it…not even when the people decided to change the name to Franklin, in the hope of winning favor with Benjamin Franklin and some of the others.

When the petition failed to pass, the people in the area grew angry, and decided to defy Congress. On this day, August 23, 1784, they ceded from the union and functioned as the Free Republic of Franklin (Frankland) for four years. During that time, they had their own constitution, Indian treaties and legislated system of barter in lieu of currency. Two years into the Free Republic of Franklin’s history, North Carolina set up their own parallel government in the area. The economy was weak, and never really gained ground, so the governor, John Sevier approached the Spanish for aid. That move brought a feeling of terror in the government of North Carolina, and they arrested Sevier. The situation worsened when the Cherokee, Chickamauga and Chickasaw began to attack settlements within Franklin’s borders in 1788. Franklin quickly rejoined North Carolina to gain its militia’s protection from attack.

It was a short life for the little nation of Franklin, and eventually they wouldn’t even belong to North Carolina, but rather became a part of the state of Tennessee. It just goes to show that the growing pains of a nation can

take on many forms to reach their destiny as a whole nation. Some changes are good ones, and continue on into the future, and others are not so good, and are sometimes absorbed into the fabric of history and time, and end up looking nothing like the change they started out to be.