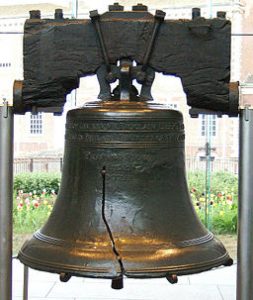 Everyone has heard of the Liberty Bell. The bell was ordered in 1751, to commemorate the 50th anniversary of Pennsylvania’s original constitution. The Pennsylvania Provincial Assembly ordered the 2,000 pound copper and tin bell. The bell was placed in the Pennsylvania State House, which is now known as Independence Hall. The bell rang out summoning citizens to the first public reading of the Declaration of Independence, by Colonel John Nixon. The document was adopted by delegates to the Continental Congress meeting in the State House on July 4th, however, the Liberty Bell, inscribed with the Biblical quotation, “Proclaim Liberty Throughout All the Land unto All the Inhabitants Thereof,” was not rung until the Declaration of Independence was returned from the printer on July 8th.

The bell was made of inferior materials, and cracked during the first test. It was recast twice and finally hung from the State House steeple in June 1753. The bell was rung on special occasions, such as when King George III ascended to the throne in 1761, and to call the people together to discuss such important things as the controversial Stamp Act of 1765. With the outbreak of the American Revolution in April 1775, the bell was rung to announce the battles of Lexington and Concord. Of course, the most famous time it was rung was July 8, 1776, when it summoned Philadelphia citizens for the first reading of the Declaration of Independence.

When the British were advancing on Philadelphia in the fall of 1777, the bell was removed and hidden in Allentown to protect it from being melted down by the British to be used for cannons. Following the defeat of the British in 1781, the bell was returned to it’s place in Philadelphia which was the nation’s capital from 1790 to 1800. In addition to marking important events, the bell was used as a part of the celebrations such as George Washington’s birthday on February 22, and Independence Day on July 4. In 1839, bell was first given it’s name when it was coined the Liberty Bell in a poem.

As to the crack that finally made the Liberty Bell unsuitable for ringing, there has been some dispute. It was 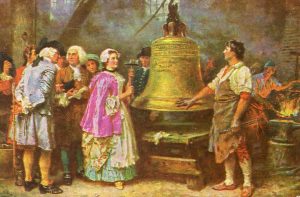 finally agreed upon that the bell suffered a major break while tolling for the funeral of the chief justice of the United States, John Marshall, in 1835, and in 1846 the crack expanded to its present size while in use to mark Washington’s birthday. After that date, it was decided that the bell was unsuitable for ringing, but it was still ceremoniously tapped on occasion to commemorate important events. On June 6, 1944, when Allied forces invaded France, the sound of the bell’s dulled ring was broadcast by radio across the United States. In 1976, the Liberty Bell was moved to a new pavilion about 100 yards from Independence Hall in preparation for America’s bicentennial celebrations. The Liberty Bell will always be a symbol of patriotism and liberty in my mind.