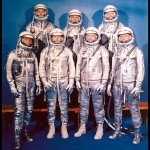 The year was 1959, and things were changing rapidly in the world of flight. Airplanes had been around, and actually flying since the December 17, 1903 flight of the Kitty Hawk by the Wright brothers. Air travel, while not as common as it is today, was fairly common. Now, it was time for the next step. We had looked through telescopes, found the planets, their moons, and other suns. We discovered galaxies beyond our own, and then, someone…somewhere, decided that it was time for mankind to go out there and have a look for ourselves.

By late 1958 plans were well underway to take that first step. Seven men were picked, and on this day April 9, 1959 NASA announced that they had decided on the first seven astronauts, who would take that very first space flight. The men were dubbed The Mercury Seven, but were also called the Original Seven or Astronaut Group 1. The men were Scott Carpenter, Gordon Cooper, John Glenn, Gus Grissom, Wally Schirra, Alan Shepard, and Deke Slayton. They piloted the manned spaceflights of the Mercury program from May 1961 to May 1963. They weren’t the first men in space, but they were the first from the United States. The first human to journey into outer space, was Yuri Gagarin, when his Vostok spacecraft completed an orbit of the Earth on 12 April 1961. Alan Shepard became the first American in space 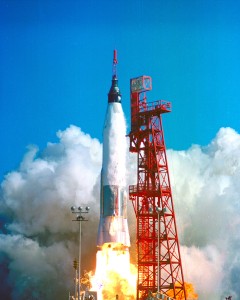 when the Freedom 7 spacecraft blasted off from Florida on May 5, 1961, just under a month after the Russian flight. Ten years later, Shepard would fly again to become the fifth man to walk on the moon…and the first to play golf there.

Most of these seven men went on to fly in many successful missions, with Gus Grissom being the only one to die young and on duty with NASA, in the Apollo 1 fire. Members of the group flew on all classes of NASA manned orbital spacecraft of the 20th century…Mercury, Gemini, Apollo, and the Space Shuttle. John Glenn, the oldest, is the only one who is still living. He went on to become a United States senator, and flew on the Shuttle 36 years later to become the oldest person to fly in space. The others all survived past retirement from service. These men played a key part in the world as we know it today, because space travel has played a key part in many of our modern medicines and scientific research. And it all began on this day in 1959.