A Most Unusual Wave 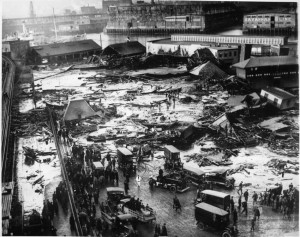 These days, most tsunami waves come with prior warning…at least since the 1946 wave that hit Alaska and Hawaii. Nevertheless, there are disastrous waves that are largely unpredictable, and those can be as deadly as the ones that the Pacific Tsunami Warning System warns people about. One in particular I had never heard of, until my sister Cheryl Masterson heard about it and mentioned it a few days ago. It happened in Boston, Massachusetts on January 15, 1919, and while it was of a very different variety than most tsunamis, it was deadly nevertheless. This tsunami was so strange, in fact, that most people wouldn’t even believe that this is a true story, but it did happen.

Around 12:40pm on January 15, 1919, a storage tank holding 2.3 million gallons of molasses exploded at the Purity Distilling Co. in the North End of Boston, sending waves of molasses rushing through the streets at almost 35 miles per hour. I’m sure that many people wouldn’t even think of this event as being at all dangerous, I mean after all, it’s just molasses. Nevertheless, a 25 foot high wave of molasses coming at you going 35 miles per hour is as deadly as being hit be a car. There was no warning, and in reality, there couldn’t 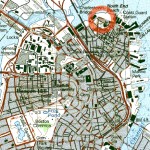 be. The molasses was being stored in the tank awaiting transfer to another plant and, due to its quickly rising temperature, it set off a tragic and previously unheard of chain of events. According to witnesses, the ground shook as if a tornado or freight train were coming down the street.

According to The Boston Globe, citizens “were picked up by a rush of air and hurled many feet.” A truck itself was picked up by the gushing wave and thrown into Boston Harbor. The force of the wave was so destructive, it almost tipped a railroad car off of Boston’s elevated railway tracks.” And The Boston Post described the gruesome scene, “Molasses, waist deep, covered the street and swirled and bubbled about the wreckage. Here and there struggled a form — whether it was animal or human being was impossible to tell. Horses died like so many flies on sticky fly-paper. The more they struggled, the deeper in the mess they were ensnared. Human beings — men and women — suffered likewise.”

The final death toll was set at 21, while 150 people were injured. The dead were either crushed by debris filled molasses, or drowned by the molasses itself. People and animals were seen struggling, some for which nothing could be done. The clean up was massive. Fire trucks were brought in to hose down the streets, and welders to 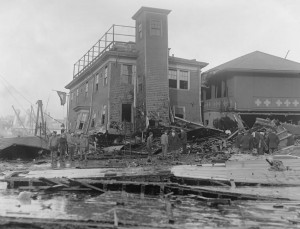 cut the tank up. The harbor was brown until summer. The molasses seeped into every crack, and it is said that on hot summer days, you could smell it for decades. I’m not sure how that could be, but maybe their minds played tricks in them too. In the end, the public outcry made a lawsuit necessary. The townspeople brought a class-action suit against the United States Industrial Alcohol Company, which had recently bought the Purity Distilling Company. Three years of hearings later, the USIAC was found guilty and forced to pay $600,000, which would equate to almost $10 million today, in settlements for negligence. The wave was as deadly as any tsunami could have been, but in reality, no warning could have prevented this tragedy.