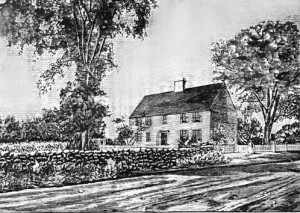 As an insurance agent and living in Wyoming, which does not have the history that some of my ancestors built in the east, when I think of an old house, something in the 1910s comes to mind, but in reality, that is not an old house at all. In fact, by comparison to Bob’s 7th great grandfather, Reverend James Noyes’ house, a home built in 1910 would be considered brand new. The house James Noyes built was, and still is located at 7 Parker Street in Newberry, Massachusetts…a small town of about 7,000 people located in Essex County. It is really a suburb of Newburyport, which has a population of about 18,000. Newbury is situated in the Northeast corner of Massachusetts, near the coast. Newbury was founded by Reverend James Noyes and his cousin Reverend Thomas Parker, who were English clergymen who immigrated to the United States. James Noyes was educated at Oxford, before relocating to Massachusetts in 1634. He spent a short time in Medford, before moving to Newbury to pastor a church there from 1635 until his death. He sailed aboard the Mary and John of London, accompanied by the Hercules on March 23, 1634 with his wife Sarah Noyes, brother Reverend Nicholas Noyes and cousin Reverend Thomas Parker. Newbury was originally named Newbury Plantation, and was incorporated in 1635. 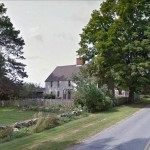 The house that Reverend James Noyes built in 1646, is a historic First Period house, and was added to the National Historic Register of Historic Places in 1990. First Period houses have a steeply pitched roof, a slightly asymmetrical plan, and a central chimney. The first period house is distinguished from later houses by its exposed…often decorated or beveled frame in the interior. Some early windows in modest houses may have had no glazing, but the standard first period window, until at least 1700, was the diamond-paned casement. The main block of the James Noyes house is a 2½ story wood frame structure, five bays wide, with a large central chimney. When the house was first built, it was only a single room deep. Then, around 1800 a 2½ story cross gabled addition was added to the rear, which was further extended by a 1½ story addition later in the 19th century. The interior rooms of the main block have Federal period styling, probably dating to the time of the first addition.

I’m sure that to many people the idea of a house built in 1646 that is still standing is, at best a novelty, but when you couple that with the fact that it was built by one of your ancestors, it becomes a little bit more interesting. My mind wanders back to what life might have been like for them in that home in the mid 1600s. 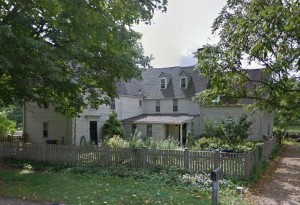 Of course, there were no modern amenities, such as a bathroom, dishwasher, refrigerator, modern stove, and other such conveniences, but it was still a pretty house for the era, I’m sure. While it was originally quite a bit smaller, but with the additions, it is now 4200 square feet and has six bedrooms. I have looked around online to see if there are any pictures of the interior of the home, but found none to date. Maybe we will have to visit there sometime, but until then, I will just have to be happy knowing that a home built by our ancestor, and a founder of Newbury, Massachusetts is still stand, still in good condition, and still being occupied by a family, who is making memories of their own there.

6 Responses to This Old House