And March Came In… 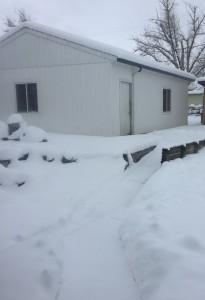 There is an old saying, “If March comes in like a lion, it will go out like a lamb.” If that’s the case, then one must assume that the opposite is also true. And in the case of March, 2016…the opposite would definitely be the case. Bob and I were married on March first, and so we go to Thermopolis around that time to celebrate our anniversary. This year was absolutely beautiful!! It was warm with no snow, and our quiet little walks were just lovely. The groundhog had predicted an early Spring this year…and unusual prediction for him, so I was feeling very optimistic about the remainder of the Winter…or the lack thereof. Now it’s not that I’m superstitious, and I don’t believe that these predictions are superstition anyway, but rather God’s way of showing us little signs of His plans for the future. He tells the animals things that humans just don’t hear, like telling the geese when to fly south or to head north. We humans have somehow become so scientific that we fail to listen to the signs from God.

Of course, the scientists would say that they are able to predict the weather too, and perhaps they do listen to the signs of God, whether they admit that is what they are doing or not. Still, I find it odd that things like the groundhog not seeing his shadow on February 2nd, or the way March makes it’s annual entrance, can have such an impact of the weather over the next month or so, but they do nevertheless. One thing that many of us have come to look for is the time when the geese fly south. If they head out early, we have a pretty good idea that Winter will soon follow, but if the stay around into late fall, things could be very different for the Winter. They simply have been told that there is no hurry to leave. It is maybe the one sign from God that we humans have noticed over the years.

Be that as it may, we have arrived at the end of March in Wyoming. Enter Winter Storm Troy!! This Winter has been a relatively easy one, even though, the snow that fell in mid-December, didn’t leave the streets until mid-February. Nevertheless, I am pretty much over Winter after the first snow of the season, so I was looking forward to an early Spring. Now, with the end of March upon us, it decides to follow the old saying, and go out 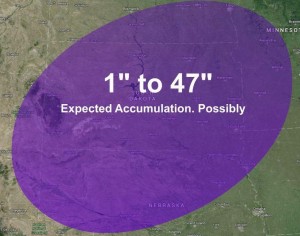 like a lion…since it came in like a lamb. That said, we are sitting here in Wyoming with about sixteen inches of snow on the ground, many businesses closed, and schools that would be…were it not for Spring Break. This storm is not supposed to hang around very long, but those unfortunate people in its path could get anywhere from 1″ to 47″ of the white stuff. I certainly hope we are not on the 47″ end of that scale. The snow is expected to continue through tonight and finally heading out around 6pm tomorrow. After that, look out, because when the temperatures heat up to the low fifties by Sunday, all this snow is going to melt, and become…a whole lot of water. I guess that is the April Fools Day joke in all of this weather prediction process.