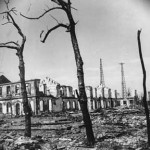 Anytime humans go to war, the one sure outcome is loss of life. That is just a fact of war. Of all the wars that the United States has been involved in, World War II interests me the most, because of my dad’s involvement, I’m sure. War is a brutal activity, but with the evil in the world, it is sometimes necessary. Evil nations leave us no choice but to step in. Such was that case with World War II, and Japan. On this day, March 9, 1945, the United States warplanes launched a new offensive against Japan. The campaign carried out involved dropping 2,000 tons of incendiary bombs on Tokyo over a two day period. Almost 16 square miles in and around the city were incinerated, and between 80,000 and 130,000 Japanese civilians were killed in the worst firestorm in recorded history.

Early that morning, Air Force crews met on the Mariana Islands of Tinian and Saipan for a briefing. This would be a low level bombing attack on Tokyo beginning in the evening, but this one would be different. The planes would be stripped of all guns except for the tail turret. This would decrease the weight…increasing the speed of 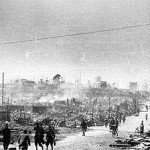 each Superfortress bomber. This also increased the bomb load capacity by 65 percent. Now each plane could carry more than seven tons of bombs. The most crucial thing, however, would be speed. If the plane didn’t make it out of the city, the airmen were warned to get to the water as fast as they could, because their very lives depended on it. Staying in the city would mean a fiery death, because they were going to be delivering the biggest firecracker the Japanese have ever seen.

The first location would be the suburb of Shitamachi, which was composed of roughly 750,000 people. The destruction of Shitamachi would destroy the light industries, called “shadow factories,” that produced prefabricated war materials for Japanese aircraft factories. The citizens of Shitamachi never had a chance against the Superfortress B-29 bombers. Their fire brigades were undermanned, poorly trained, and ill equipped. All the people could do was to run from the inferno that the city had become. The planes…334 in all, came in a just 500 feet above the ground. Most of them didn’t make it. Doctors said, “The human carnage 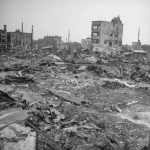 was so great that the blood-red mists and stench of burning flesh that wafted up sickened the bomber pilots, forcing them to grab oxygen masks to keep from vomiting.”

The entire raid lasted just a little longer than three hours. When it was over the Sumida River was clogged with bodies of the dead, burned beyond recognition. The sight was beyond anything anyone could have imagined. The loss of American lives was a mere 243 airmen, and these were considered to be acceptable losses. I suppose that these days, such a raid on known civilian targets would be considered unacceptable, but at the time it was considered acceptable, and even necessary. And it was successful, in a horrible sort of way.