They Just Lose Their Fight 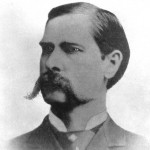 Growing up, my sisters and I watched lots of westerns. It wasn’t so strange really, because westerns were the in thing back then. Everyone loved watching them. One show I remember watching was The Gunfight at the O.K. Corral. It all seemed like it took place so long ago, and to many people I guess it was. Still, when you think of the fact that Wyatt Earp, a frontiersman, marshal and gambler, who got into a feud in Tombstone, Arizona, that led to the famous gunfight at the O.K. Corral passed away quietly in Los Angeles on January 13, 1929, it doesn’t seem so long ago anymore. I guess that in Wyatt Earp’s case, old gunfighters never die, they just lose their fight. Wyatt Earp was born on March 19, 1848, and that seems long ago. The gunfight took place on October 26, 1881…and Wyatt Earp survived. He had led such a wild life, that the thought of him ending up dying quietly in Los Angeles seemed…well, just too tame, and just too much a part of modern times to be right. Nevertheless, it was right. He did live in modern times, and in fact was a friend of John Wayne’s.

I’m not sure why that whole scenario struck me as odd. Wyatt Earp was 80 years old at the time of his passing…not an overly excessive amount of years…average, in fact. Since he was born in 1848, his passing in 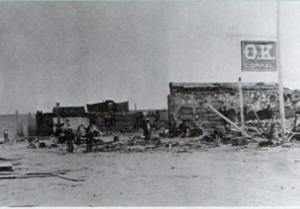 1929 would be right. I guess that the thing that seemed strange to me was the fact that when Wyatt Earp passed away, my own dad was five years old. Yes, he was an old man, and my dad a young boy, but for those five years, their life spans occupied the same space in history. And yet, my dad’s life had no connection to the time of Wyatt Earp, or to the man that he was.

Wyatt Earp was a boy in search of adventure, and ran away from home twice after the Civil War broke out when he was 13. He went to join up with his two older brothers, Virgil and James. Each time he ran away, he was caught before he could reach the battlefield, and he was sent back home. Finally, at the age of 17, he left for good. His family had moved from the Illinois farm to California, but Wyatt wanted adventure, so he headed out to seek his own idea of life. He worked many different jobs, most notably as a lawman, and of course, a gambler. Life was not kind to Wyatt Earp. At a point when he was finally ready to settle down with the woman he loved, he married Urilla Sutherland, the daughter of the local hotel owner. The couple married about 1870, built a house in town, and were excitedly awaiting the birth of their first child. Then, life hit him with it’s most 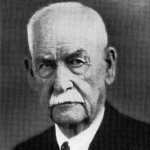 cruel blow. Within a year of their marriage Urilla contracted Typhus and died, along with their unborn child. Wyatt went off the deep end and became wild again. Eventually, he would be suspected of killing one of the suspects in his brother, Morgan’s death.

Unfortunately…or maybe fortunately, the west began to settle down. Wyatt was getting older. He settled in Los Angeles and hoped to have the Old West and his own legacy portrayed in film, but Hollywood wasn’t interested until after his death. I suppose it was then that Westerns moved into the forefront of television and movies. Westerns would then have a long run of popularity in the homes of many people…ours included.

2 Responses to They Just Lose Their Fight