She Saw, He Saw 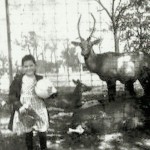 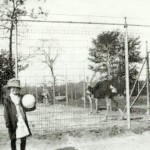 Families have long loved to visit places like museums and zoos. It give them a chance to have an outing with the kids whereby they are out of the house, and yet learning something too. My grandmother, Anna Schumacher Spencer was no exception to that rule. For the first ten years of her eldest child, my Aunt Laura Spencer Fredrick’s life, Grandma didn’t have any other children. I’ve never known just why that was. The family history doesn’t tell of miscarriages or lost babies, but until my Uncle Bill Spencer came along, ten years after his sister, Laura, and then was quickly followed by brother, Allen Spencer (my dad), and then Aunt Ruth Spencer Wolfe, that was simply the case. Grandma and Aunt Laura were very close, and did lots of things together. The pictures of that time frame show visits with family, time spent picking flowers, and a trip to the zoo, which brings me to my story.

As I said, Grandma was very close with her daughter, and took lots of pictures of her and with her. Because of that closeness, she didn’t pay as much attention to the things or animals around Aunt Laura, but rather paid attention to Aunt Laura in the photo. It really was a matter of what subject she felt was the most important in the picture…obviously for Grandma that was Aunt Laura. She wanted to be able to tell of all the events of Aunt Laura’s young life, and Grandma did a great job of that.

As Uncle Bill began going through all the pictures and writing up the family history, he came across many pictures that rather frustrated him. That’s where his opinion on the pictures Grandma had taken came out. It wasn’t that Uncle Bill didn’t like the pictures of his sister, because he did…they were very close as children. The problem for him occurred with the picture of his sister, Laure standing by a cannon. Needless to say, I have to agree with Uncle Bill to a large degree. While the pictures of Aunt Laura with the zoo animals are great, I didn’t know what the cannon was at all, until Uncle Bill clarified that for me. Instead of taking the picture with a side view of the cannon, Grandma has taken it with a back view. It was pretty much impossible to know what it was without being told or maybe having a background that clarified it for you. Uncle Bill was rather annoyed, and commented on the picture with, “Come on Mom!”

That picture wasn’t the only one that Uncle Bill was upset with either. Another picture that was very good, but was not taken by Grandma, irritated him nevertheless. It was a picture marked only as, “Mother’s niece.” I’m 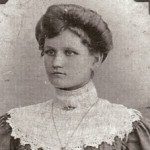 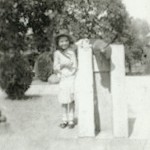 sure that, like most people, Grandma figured that she would always know who it was, but what she wasn’t thinking about was that the rest of the people, who would someday look at the picture, would never know who it was. Again, it was a matter of what Grandma saw as important and what Uncle Bill saw as important. Sadly, Grandma is gone now, so we cannot ask who this niece might have been. She didn’t mean to do these things to upset her son, of course, it was just that what she saw and what he saw as important, were two very different things. And in this case, quite upsetting to my uncle.