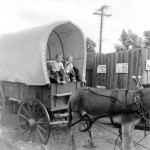 Over the years of our childhood, my sisters and I were exposed to the history of this great nation. Mom and Dad loved the things that showcased the Old West, including Country Music, old western movies, and western books, but they mostly wanted to show us the places where the Old West really happened. Of course, some of the places were replicas of the real thing, such as Wall Drug. Any time we went through South Dakota and there was enough time, we stopped at Wall Drug. It’s funny to think that a drug store could be called a tourist attraction, but with all the wagons, horse statues, and photo boards, people come just to see the sights in the drug store. Wall Drug is in the town of Wall, South Dakota…a huge town of 906 people…and that is today, so I’m sure it was much smaller when I was a little girl. In fact, I don’t recall anything about the town of Wall…just the drug store. I suppose that sounds funny, but the drug store really was the coolest place in town.

Of course, when Mom and Dad took us to see relics of the old West, they would take us to places like an old 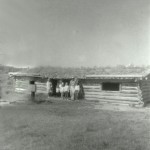 fort, which inevitably included an old cabin with a sod roof. People these day, have no idea how that worked…unless they had parents who made sure that they got to see a real one. Even when you study about it in school, there is nothing quite like being able to see what it was really like inside a house with dirt and grass for a roof. I have read books like, “Young Pioneers” and the “Little House On The Prairie” books, that talk about having a sod roof, or even a Soddy, which is a house built out of sod, often into a hillside. The floors were obviously dirt, and the homemaker would actually sweep those dirt floors. As I read about that, I began to wonder if those women weren’t just a little bit crazy, but then again, I suppose that if you left the crumbs in the house, you would have more bugs than normal, because I personally don’t see any way to have a sod home be completely bug free. And of course, depending on what got spilled, the floor could take on a sticky life of its own. After thinking about that for a little while, I think I might consider sweeping that dirt floor too.

When I think about it though, what would the Old West be, without horses. I can’t say that I ever gave any 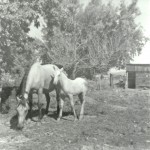 thought to having horses of my own, but I think horses are awesome, if someone else has to clean up the stalls. There were people that Mom and Dad knew, who had horses, and they might have been family members for all I know. Having friends or family who had horses made it possible for us to have a little bit of exposure to horses and how they were. I can’t imagine having to travel everywhere by horse, but riding one is a lot of fun. I feel like our parents gave my sisters and me vacations combined with education. Mom and Dad always made it feel like we were really there in the Old West. It was like going back in time. It was an education that you couldn’t get in school, and while I was no fan of history in school, I must say that history as my parents taught it to us, was an amazing journey.