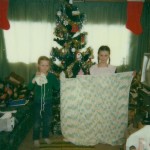 With Christmas fast approaching, I am reminded of the Christmas of 1984. With their cousin Jessica Hadlock Sawdon, arriving shortly before Christmas, my girls, Corrie Petersen and Amy Royce wanted to do something special for her…even though they didn’t know then if the baby was a boy or a girl. We could have gone and purchased a blanket, an outfit, or a toy, but so could anyone else. The girls wanted their gift to be different from what everyone else was going to give. They were learning to crochet, and so it was decided that Corrie would make a blanket and Amy would make a bonnet. They worked very hard on their gifts, and on Christmas morning, they proved to be a stunning success. My girls beamed with pride at how their gifts were received. 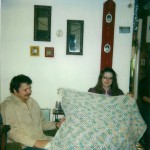 So often, these days, Christmas has become so commercialized that it often isn’t about the gift given, but rather about just how much was spent on it, that seems to matter. But, on that Christmas, for my girls, it was about their gift being made with love. Every stitch they put in the blanket and bonnet was a learning experience for them, and they couldn’t wait to see what their Aunt Allyn and Uncle Chris Hadlock thought of the gifts they had worked so hard on. Needless to say, the blanket and bonnet were very happily received. Their gift was a huge success, and no one gave a thought to how much money was or was not spent on it.

There were a lot of gifst given that day, and I’m sure that many were wonderful, and very much appreciated, but I also know that my sister, her husband, and now Jessi all remember the gifts that were made and given with love by two little girls who loved their new cousin very 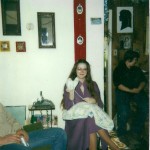 much, even though they did not know her yet and in fact, didn’t know if she was a boy or a girl. The things we do for people out of love, while not necessarily expensive, are often the most treasured of the many things we receive over the years. They can’t be measured in a monitary way, because they are indeed priceless.

As Christmas approaches, of course, the most important thing to remember is the reason for the season…Jesus…the Saviour of the world. Jesus was the greatest gift, but in today’s world, I think it is always a good idea to remember more than just the gifts we received, but rather the spirit in which they were given. Whenever we act in love, we give the greatest gift we could have given…ourselves. And that is priceless for sure.

2 Responses to Made With Love