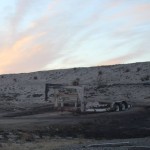 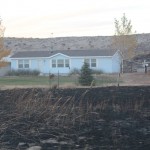 On October 11, 2015, a wildfire devastated a large area north of Casper, including the area where my nephew, Barry Schulenberg and his wife, Kelli live. While their house was not one that was damaged, they did not escape unscathed. They lost a shed with some lawn equipment in it, fifteen or more trees, a flatbed trailer, and about eight cords of wood, which was enough to heat their home for the coming winter, just to name a few of the things. While insurance will reimburse them for some of the loss, it will not cover all of it, nor will it even begin to reimburse them for the many hours spent cutting all that wood the first time. And the hardest thing to get back…peace of mind.

People would call them lucky, that so much of their property was spared, but I don’t really think anyone who lost anything in that fire, that took 10,000 acres, 12 homes, a number of animals, and several other structures, considers themselves lucky…except that they made it out alive. I still don’t consider that luck. I believe it was the prayers of the people of Casper and others around the nation that kept the loss to the relative minimum that it ended up being, compared to other large fires. 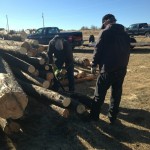 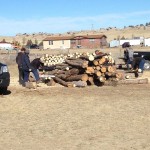 In the aftermath, many people have donated money and other needed items to those who suffered loss that dreadful day, and many will continue to do so. There is no way for me to talk about them all, but they know how much the people who they have helped appreciated it. Help after a loss never goes unnoticed. It is a show of love, kindness, and compassion that can never be repaid. People helping people…the giving spirit. It is what people do for those in need.

As for Barry and Kelli Schulenberg, a special family and friends benefit took place yesterday, when a dozen people converged on my brother-in-law and sister-in-law, Ron and Rachel Schulenberg’s place, where thankfully, Barry and Kelli still had some wood, waiting to be cut. Those dozen people spent most of the day cutting, loading, and unloading the ten cords of wood, that now sits where the first eight cords had been at Barry and Kelli’s place. I know that they already feel much better about the coming winter, because without all that wood, it would have been a much more expensive winter in the heating department. 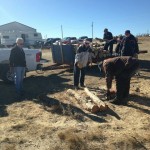 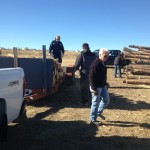 The things that Barry, Kelli, and the other fire victims lost in the fire will at least partially be replaced, but the thing you can’t put a value on is the helping hands of the people who stepped up to help you rebuild your life. The fire victims lost a lot of things, but things can be replaced. Nevertheless, cleanup, replanting, re-cutting of wood, and so many other things that had to be done after a fire, take time and effort. I have to give a lot of credit to anyone who helped to put the lives of the fire victims back together. The kindness of those helping hands was a blessing that will never be forgotten.