Just Wake Her Up 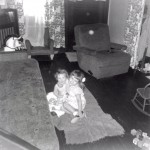 An only child, or a child who doesn’t have a sibling yet, simply cannot understand just how much fun a sibling can be. It isn’t their fault, and it isn’t that they don’t want to play with other kids, it’s just that they don’t have a lot of other kids around on a regular basis. Those kids simply learn to be around adults, or they learn to entertain themselves. I’m not saying that there is anything wrong with this in any way, just that when there is a sibling in the family, things change.

For two years, my sister, Cheryl Masterson was an only child, but then I came along, and those days were over. I know that she was very excited about having a little sister, even though she did have a cousin, Pam Wendling, who lived just on the other side of the back fence, but I was her first sibling. We used to have lots of fun together, like most siblings do. It’s just something new, and even later on, you always have a friend. Sisters as you know are forever friends. 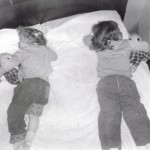 Once, Cheryl had a little sister, life as she knew it changed. As kids, we did a lot of things together. I recall movies, in which Cheryl tried to keep up with me in a crawling race, and apparently, I was too fast for her, because she ended up standing up to try to beat me across the room. That isn’t so odd, when you consider that most of us quit crawling when we learn to walk. That would tend to make us a little bit slower when it came to crawling in a race. Anyway, in crawling races, I won and she lost. I’m sure that when it came to walking races, she had it over me, because after all, I had to crawl, since I hadn’t learned to walk yet.

The biggest problem that Cheryl had, as far as our time together was concerned, was when I was napping and she was awake. Once a child has a sibling, they don’t like waiting for their sibling to wake up when they want to play. That naptime thing can seem endless. They begin to wonder if that kid is ever going to wake up. There is fun to be 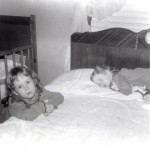 had, games to play, and well, just stuff to do, and all that kid wants to do is sleep.

That was where Cheryl found herself on one particular occassion. I was sleeping and apparently she had taken her nap and was now waiting for me to wake up. I guess I was taking too long, because, she started to ask Mom why they couldn’t just wake me up. Well, I don’t know if I was grouchy if they woke me up early, or what, but I guess Mom wasn’t too keen on the idea. Cheryl, on the other hand looks very annoyed that I was sleeping, and Mom would do nothing about it. Sorry Cheryl, if I had only known, I would have woke up just for you, but I simply had no idea, because, I was asleep.