The San Francisco gold rush was a crazy time in American history. It was almost giddy in many ways. Gold does funny things to people. Just the thought of striking it rich made people pull up stakes and move west to try their hand at gold mining. Once people had made their fortunes, many decided to head back home to the east. Apparently the idea of wagon training back was not so appealing on the journey home, so these now, people of wealth decided to go by ship. The easiest crossing was through the Panama area. Of course, the Panama Canal was not built yet, although the French had tried to do so, but it wasn’t done yet. So the trip became a two ship journey.

On August 20, 1857, several hundred passengers in San Francisco boarded the SS Sonora, of the Pacific Mail Steamship Line, and headed south toward Panama City. The 1857 value of the gold on board was 1.6 million, so just imagine today’s value. Thousands of freshly minted 1857-S double eagles, some earlier $20 coins, ingots, and gold in other forms were among the treasures. Some of the double eagles were stacked in long rows or columns and nestled in wooden boxes. Elsewhere around the ship, passengers had their own stash in purses and boxes reflecting their success in the land of gold. Once they arrived in Panama City, they were transported by train to on the Panama Railroad, which was a 48-mile line, completed in 1855 and had facilitated the crossing of the isthmus in about three or four hours as opposed to paddling and tramping through the jungles for several days. When the train arrived in Aspinwall, the passengers disembarked, and the treasure was transported to storage.

The next leg of the trip was aboard the side-wheel steamer SS Central America. The ship had been called the SS George Law, but the name was later changed to the SS Central America. It was now on its forty-fourth voyage for the Atlantic Mail Steamship Company. The Atlantic Mail Steamship Company was operating under federal mail contract to provide mail to the people between the east and west. The steamers had Navy captains at the helm, men of proven reputation and experience. Capt. William Herndon commanded the Central America.

In early September 1857, the gold treasure was carefully packed aboard. The passengers found their cabins, and all were ready for the pleasant voyage to New York City. It was an ideal time of year for travel. A few days later, on September 7, 1857, the ship docked in the harbor of Havana. It was a popular stop for the passengers, who set about buying souvenirs and exploring the sights of the town. The trip toward New York continued to be pleasant. The skies were sunny and the sea smooth…temporarily.

At 5:30am on Wednesday, September 9, the ship’s second officer noted that the ship had gone 286 nautical miles in the preceding 26½ hours. He noted that a breeze was kicking up, and perhaps they were in for a storm, but expressed no concerns, because they were experienced and could handle a storm should it occur. That would prove to be the first mistake made. The storm grew furious and they were too far from a port to do much except keep the SS Central America into the waves. By Friday morning, September 11, the crew was still in control, but the ship was taking on water through the drive shaft, broken or open lights and elsewhere. The ship was tossing violently. It was virtually impossible to feed coal into the boilers.

At 11am Captain Herndon told the passengers that the ship was in grave danger. He enlisted the help of all men to bail water with a bucket brigade. By 1:00 in the afternoon the rising water in the hold doused the boiler 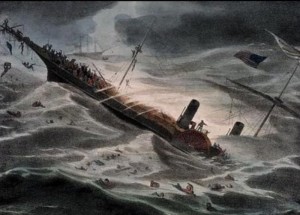