Once In A While 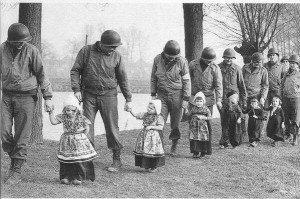 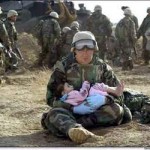 When we think of soldiers, most of us picture the fighting machines that these men have been trained to be, and we would not be wrong in most respects, but what we sometimes fail to realize is the fact that a soldier is a person with a deep love of human life. They don’t go to war because they want to be trained killers, but rather they go to war because they want to preserve life, and a way of life. They see that there are people in this world who are being abused, beaten, and starved into submission…or worse yet killed for refusing to submit. There are evil people in this world, who somehow feel that they have the right to control other human lives. They want servants, or they want to sell people, or just own people. Soldiers go to war, because they see these evil actions for the wrong that they are, and they can’t stand by and let it just happen.

So yes, in that respect, our picture of the trained killer is exactly right, but what we so often miss is the human side of the soldier. We miss the man or woman who has left their own children, nieces, or nephews behind to go and fight for children in some other country, so that they might be able to live out their lives in the same safety that the children, nieces, and nephews of the soldier are able to live in back home. The problem is that we don’t often realize what things they do for those children in other nations. We don’t often see the moments of playing with the children. We don’t see the children who come up to the soldiers, because they feel safe around them…even with the possibility of gunfire at any moment. They still feel safer near the soldiers than they do on their own.

And for our soldiers, who are so lonely for their own children, nieces and nephews, it is a nice break from the reality of war, with all its ugliness, even if it is just once in a while, and even if it is just for a few moments. Maybe they can take a few moments and pretend that this child they are playing with is their own child at home. Maybe they can pretend that they are pushing their own child in a swing, on a merry-go-round, or just giving them a simple hug. Perhaps those few moments that they get once in a while, can take them away from 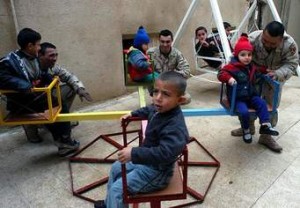 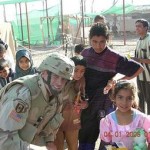 the worry for their own safety, or the fact that in a little while they will be faced with an enemy, who they will have to kill, or they will be killed. War is a hard place to be, and a life event that no soldier can ever forget, so it is nice, for just a few moments, to be able to spend a little time with a child, to get away from the war and the ugliness that lies within it. Sometimes we, the people back home need to just consider the sacrifice our soldiers make, and be glad that they have a moment of relief, even if it is just once in a while.