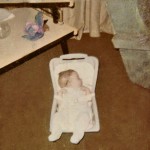 Into most little lives, a sibling must enter. Sometimes the baby is born into a family with other children, and so they just seem like a normal part of life, but sometimes as can be the case with the oldest child, that new little sibling is a bit of a culture shock. Still, most of the time the older child is very excited about this new little playmate, but sooner or later it occurs to the older child that this new little baby sure gets a lot of attention, or cries a lot, or is…basically very needy. That is the point when they become just a little bit disenchanted with this new little person, and they start to wonder why their parents decided to get this kid anyway. And sometimes they are very jealous of this new sibling, and really want the baby to be sent back. Oh they may still love them sometimes, but they sure can be annoying, and they sure take up a lot of Mommy’s and Daddy’s time. Time that used to be exclusively the older child’s time, and now must be shared. 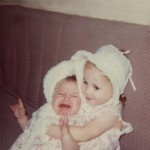 For my niece Chantel Masterson Balcerzak, who really did love her sister, Toni Masterson Chase, and who I don’t really think ever felt a lot of resentment, I suppose it was really just a matter of letting everyone know that she was still there. Chantel was always a bit of a Diva, and so she liked her fair share of attention. She liked being the big sister, and helping her mom with the kids who came along after her, but just remember that she was still there, and she was after all…cute too. Of course, it wasn’t like anyone was going to forget that, because after all…Chantel was the first grandchild and the first niece, and we were all excited to have her here. Nevertheless, I suppose that when Toni came along, there was a bit of attention being paid to the new baby. So, our Chantel decided that it was time to remind us that she was the baby too.

That said, one day, Chantel saw Toni’s empty baby carrier, and decided that she would just show us that she 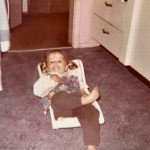 still fit the part of baby pretty well. So, she proceeded to plop down in the baby carrier, get her self situated in a very comfortable position, and flash that cute little smile of hers, as if to say, “I’n da baby too!!” Chantel was never a very big girl…in fact, fully grown, she is only 4’10”, so she really could fit in that baby carrier at two years old. I guess she proved her point. She could still play the part of a baby. Still, as the Diva part of Chantel continued to grow, she really didn’t want to take Toni’s place for very long, and as we all know, being the baby really can be kind of boring, especially when they are at the age of doing a lot of sleeping. That part didn’t interest Chantel very much at all. She was always a busy little girl, who had a lot of living to do. Sleeping was overrated. In the end, she opted for being the big sister over being the baby.

2 Responses to I’n Da Baby Too