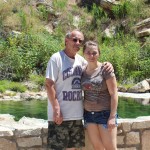 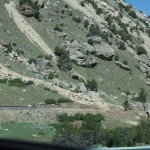 For a number of years now, Bob and I have made a trip to Thermopolis each year in early March in celebration of our wedding anniversary, which is March 1st. Driving through the Wind River Canyon that many times, I feel like I know the face of those canyon walls pretty well. Since rainy weather has dominated this Spring, many areas of the state of Wyoming and several other states, flooding is a word that we have all gotten used to hearing. Since our state has been in a relative draught for a number of years, the ground has had a hard time absorbing all that water that has been coming in. And then there is the fact that we have had a few fires in key areas around the state. That adds an additional danger to certain areas…one of which is the Wind River Canyon, which was hit with mudslides and rockslides earlier this year.

This morning, Bob and I decided to take a drive up to Thermopolis to see for ourselves, exactly how the canyon face had been changed by the mudslides. Our granddaughter, Shai Royce decided to come along to see it too. 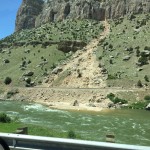 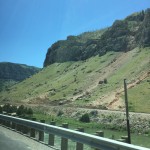 We had seen the pictures of it on television and on the internet when it happened, but you really can’t get a clear picture of something like that until you see it up close. So, after breakfast we set out. It was a nice drive up to the Wind River Canyon, and at first, it didn’t look so different, but then we got to the area where the main slides were. It was much different.

I expected it to look different, and it did, but what I didn’t expect was to have it occur to me that I was looking at the changing face of the canyon. I thought about how the canyon had changed over the years of its existence. The river made most of the changes that had taken place, slowly carving out the depth of it with erosion. Soon, its walls were high and filled with the hard rocks that had survived the erosion process. The trees grew along the face of the walls, and in time we all thought it wouldn’t change much, but rock and mudslides can change the face of those canyon walls overnight. I found myself thinking about how easy it was to pick out the slide path of each 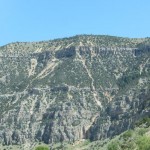 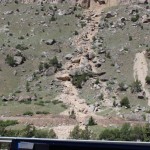 slide area. The coloring of the upturned earth made it stand out as if it were florescent paint. I was able to see the complete path the mud and rocks took on their way down.

I realized that this was just one event, but it didn’t matter, because I was looking at the changes brought about by time. This was the canyon’s changing face, caused by the effects of weather, water, wind, and fire to bring about an entirely new look to a canyon that had been there so long, looking, or so I thought, always the same. In reality, it was ever changing.

2 Responses to Ever Changing Face