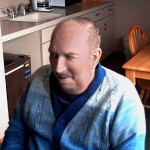 My dad passed away on December 12, 2007, but since my mom was still alive, we never really went through his things…until after her passing on February 22, 2015. Mom had given out some of Dad’s things to different family members, but the bulk of his things would wait until her passing to be given to those who would receive them.

In his later years, my dad got cold often. That can happen as we age, or with surgeries to the chest or abdomen, which dad had to repair damage from Pancreatitis. More and more often, Dad could be seen wearing a sweater, and it really became a signature item for him. One sweater in particular that he wore almost daily, was a multi-shade blue striped sweater. He wore it so often, that it is one of the ways I picture him in my mind. I had asked Mom for that sweater shortly after Dad passed away, and was told I could have it, but did not receive it until now.

This was the sweater that Dad had on when he and Mom danced their last New Years Eve dance on January 1, 2007, just under a year before his passing. It was also the sweater he wore on his visits to the hospital when Mom was receiving Chemotherapy treatments for the Lymphoma Brain Tumor that she would beat in 2007. The blue sweater became synonymous of Dad…in my mind anyway.

There are many things that remind me of my dad. Anything World War II, of course, because I have written so much about his time in the war, and because we have toured the B-17s several times together, making the B-17 an integral part of my memories of my dad. Then, there are the funny memories of Dad, that always come to my mind…things like the whisker rub, our many debates, pretending to box with him, the Oregon Trail 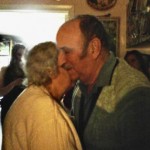 markers, the many vacations, and of course, the swatting games he played with the grandkids, will always bring back great memories of my dad. All of those things bring images of my dad and what an amazing man he was, but they are not things I can hold in my hands, and picture him if I use them. The blue sweater is.

Memories are the most precious things we have once a parent has passed, and I treasure every memory I have of my dad, as I do my mom, and there are things that will always remind me of them. And one of those things will always be that blue sweater. Today would have been my dad’s 91st birthday. Happy birthday in Heaven Dad. Have a wonderful celebration. We love and miss you both very much.

2 Responses to The Blue Sweater