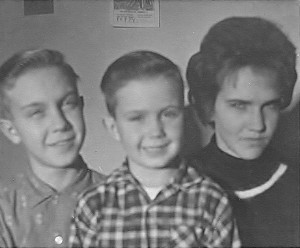 The other day, I was talking with my cousin, Shirley Cameron on instant message through Facebook, when she brought up an old memory…a blast from our past. Shirley’s mom, Ruth Wolfe was my dad, Allen Spencer’s younger sister, and our families were very close…especially when the Wolfe family still lived in Casper, and we were all little kids. Shirley was the oldest of the three Wolfe siblings, with two younger brothers, Larry and Terry. My older sister, Cheryl Masterson fell in between Larry and Terry, and I was four months younger than Terry. Our three younger sisters, Caryl Reed, Alena Stevens, and Allyn Hadlock were the youngest ones. Back in those days, the fun you had depended on your imagination. I guess we all had imagination, but Shirley really seemed to be able to come up with great ideas. And she was able to carry them out too.

We started talking about the games we played when we were out at their place, like wagon train. Of course, we didn’t have a real covered wagon or a team of horses, but that didn’t mean that we would have to be the

horses for our pull type wagons, because My aunt and uncle had a tractor, and Shirley knew how to drive it. So we hooked the wagons to the tractor, and headed down the road near their place. Oh sure, sometimes the whole thing would break down, but then what would a wagon train be without a breakdown. Even in the pioneer days, the wagons broke down…right?

Shirley had a set of dishes, and like the wagon trains of the wild west, we brought our own food the long trip…usually. Of course, sometimes we had to improvise. Since we didn’t really have a way to go hunting, we had to make due with what was available to us, and the best cooking we did was when we made mud pies. They probably didn’t taste good, and I’ll never know, because I never tasted them, but we could make them look pretty good…in a hamburger sort of way. I’m sure there were other things like vegetables picked out of Aunt Ruth’s garden, and maybe apples or berries that we came across, whether they were edible or not. No matter what we came up with, real or imagined, we always had a lot of fun playing wagon train or any other game we came up with to play. It was always interesting, but I think in reality it was Shirley who had all the great

ideas…maybe with a little help from Cheryl.

We were all as close as sisters or best friends, but we were more than that…we were cousins, and that is a forever friend…kind of like a sister is a forever friend. For Shirley, we were like the sisters she never had. Of course, we didn’t really understand what a big deal that was, because we were five sisters. We had never really known a time without our sisters, but Shirley had two brothers, and even though they were close, they weren’t like sisters. Boys think differently than girls. They like to do different things than girls. It just wasn’t the same. Yes, we played the games the boys wanted to play too sometimes, but we sure had a good time playing wagon train with Shirley.

3 Responses to We Were Cousins