Everything He Does Is Cute 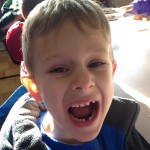 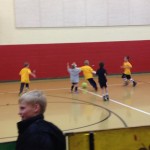 My grand nephew, Ethan Hadlock is all boy. He loves sports of any kind, as is good at all of them too. This year he played t-ball, flag football, soccer, and is soon to start basketball. Some kids are naturals at sports and others aren’t. Ethan falls into the naturals category. These sports make sense to him. He’s not afraid of the ball. He just gets out there and plays the game, and plays well. He doesn’t search for glory, but rather plays like a part of the team. That’s the mark of a good athlete.

Of course, like most boys Ethan’s age, he is into cars and ninja turtles, and super into Legos and star wars. If he is like most boys, he likes to turn the Legos into everything from cars to space ships, and with the annual Lego challenge that is held in the schools beginning in fifth grade, I’m sure Ethan will be a valuable member of that team as well…as soon as he gets to fifth grade, that is. But I guess I’m jumping the gun a little bit, since Ethan is only in Kindergarten right now.

Nevertheless, Ethan isn’t jumping the gun. He loves Kindergarten, and is a good student, learning much, and making friends. It’s always a good thing when kids like school, because it motivates them to do well. Ethan has always wanted to be one of the big kids, and figures that since he is the big brother to his sister, Rory, that being one of the big kids in school is just the logical next step. Ethan is a great friend to have. He is fun and always smiling and happy. In fact, his little sister Rory reaps the benefit of her brother’s happy, friendly ways every day. They are great friends, and he doesn’t seem to mind that she is his kid sister…at least not for now.

Ethan’s looks have changed some since he was a baby. What child does not change as they move from babyhood to childhood? But nothing has changed his looks quite as much as the event that took place on Christmas Eve. Ethan lost his first tooth. Now, I must say that it isn’t every child who gets to be visited by Santa Clause and the Tooth Fairy on the same night. Seriously…how cool is that!! Ethan’s mom, Chelsea Hadlock tells me that he was very brave. In fact, he pulled out his tooth all by himself. It is just another way of noting that Ethan is getting to be a very big boy. Such bravery is only given to a few. Most kids not only need help, but they are a little scared too. Ethan is going to be tall, like his daddy, my nephew, Ryan Hadlock who is about 6’5″ and is teaching his son more than just the ropes of being a big brother. Ryan is also teaching Ethan the ropes on teasing the girls in the family. I’m sure that before long, Ethan will be as much an expert at that as his dad is.

Every Sunday, right after church, Ethan and Rory get to have Grandma and Grandpa Time. That is probably the biggest blessing my sister, Allyn Hadlock and brother-in-law, Chris Hadlock have in their lives…or at least one of the biggest. The kids come over right after church, and they watch movies or the Disney Channel, play 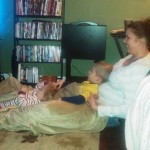 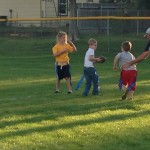 games, and of course, munch. What Grandma and Grandpa Time doesn’t include that? When I asked my sister for some ideas about what was going on in Ethan’s life, she gave me a few ideas, but then she said the one thing that shows that she is the grandma the very most. She suggested that maybe Ethan’s mom might have some other ideas of cute things Ethan has done, and finished by saying, “Of course, I think everything he does is cute!! Haha!!” Isn’t that the truth. Today is Ethan’s 6th birthday. Happy birthday Ethan!! Have a great day!! We love you!!