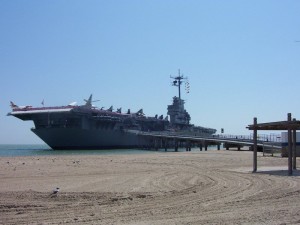 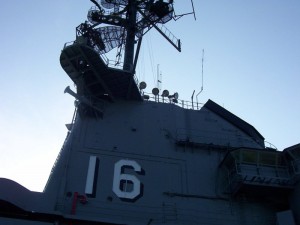 While Bob and I were in Texas on vacation in April of 2006, we had the wonderful opportunity to visit the USS Lexington…The Blue Ghost. This ship has a long and interesting history, and one I didn’t really know all that much about when I visited the ship. The ship we saw is not the original USS Lexington, but rather the one that replaced the original. The USS Lexington that we saw has an amazing history too…it is, in fact, a legend that was named for the American Revolution’s Battle of Lexington. On December 5, 1941, the original USS Lexington, which was one of the two largest aircraft carriers the United States had during World War II, was making its way across the Pacific in order to carry a squadron of dive bombers to defend Midway Island from an anticipated Japanese attack. The attack they anticipated did occur, but not where it had been expected. The attack was lodged on Pearl Harbor instead. The USS Lexington turned around and headed for Pearl Harbor, arriving on December 13th. That Lexington was later sunk.

In early May, the first USS Lexington returned to the South Pacific to assist the USS Yorktown to fight against the Japanese offensive in the Coral Sea. On May 7th and 8th of 1942 planes from the USS Lexington helped sink the small Japanese aircraft carrier Shoho and participated in attacks on the large carriers Shokaku and Zuikaku. But, she was a major target of Japanese carrier planes and received two torpedo and three bomb hits. Initially, it appeared that the damage control efforts were successful, but she was racked by gasoline explosions early on the afternoon of May 8th. The fires were out of control, and it was clear that the Lexington was breathing her last breath. The ship was abandoned by her crew and it sunk. It was the first US aircraft carrier to be lost in World War II.

The second Lexington began its journey into fame on February 17, 1943, and it would serve longer and set more records than any other carrier in US Naval history. Originally to be named the Cabot, the name was changed after the sinking of the original Lexington in the Coral Sea. The Lexington became a part of the Fifth Fleet at Pearl Harbor. The ship took part in nearly every major operation in the Pacific Theater, serving 21 months in combat. It was here that the Lexington became famous in her own right. The Japanese radio station, the Tokyo Rose was always spreading rumors and propaganda. The station declared the Lexington sunk at least four times, but was proven wrong at the next battle, when the Lexington returned to the fight. I guess it must have been in an effort to save face that the Tokyo Rose dubbed the Lexington The Blue Ghost, indicating that it was a ghost ship returning to haunt the Japanese again and again. All the hard work paid off in the end though. The Lexington participated in the Great Marianas Turkey Shoot, the Battle of Leyte Gulf, and the Battle of the Philippine Sea. She received the Presidential Unit Citation and 11 Battle Stars during her service in World War II, and she was the first battleship into Tokyo Harbor for the Japanese peace treaty signing.

By the time we visited the second USS Lexington, she had been a museum since October of 1992. The ship had been decommissioned in August of 1990, after serving as a training ship for naval aviators in Pensacola, Florida since 1962. She was moved to her permanent location in Corpus Christi, Texas in January of 1992. We had the wonderful opportunity to explore the ship to our hearts’ content while we were there. It was quite interesting to us. I didn’t know much about how things were on a ship, but I found myself amazed over and over again. The way the crew lived, seemed so archaic to me, but I suppose that anyone who has ever served on a ship would tell me that it was all very normal. Finding your way around seemed so difficult to me, and I know we would have been lost repeatedly, had they not marked the directions with arrows on the floor and walls. It was hard to imagine just what being on board this ship in the midst of a battle must have felt. I don’t think anyone goes to war without a measure of fear. Nevertheless, there was no going back for the men, and later, women who 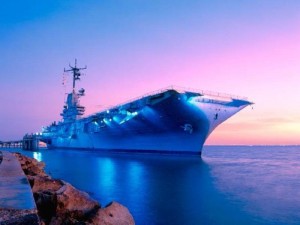 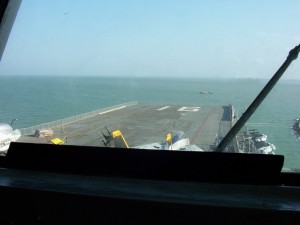 served on the Lexington. The Lexington was the first aircraft carrier to have women stationed on board. These men and women served courageously and honorably, some giving their lives on the Lexington fighting the battles that were laid out before her. Knowing the history of this great ship leaves me with an entirely new perspective about what an awesome ship it was, and it makes me glad I had the opportunity to tour the USS Lexington.