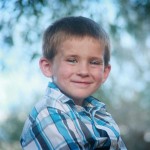 My grand nephew, Isaac Spethman is the youngest son and middle child of my niece Jenny and her husband Steve Spethman. Isaac has always been a very motivated kid. He knew that there were going to be things he wanted and needed, and he was determined to get them for himself. With that in mind, Isaac decided that he needed a job. It was a good decision for a young man to make, as much of their adult life is spent being the bread winner, or at least half of the family bread winning team.

Since Isaac understood that concept, he set out to see what jobs a young man without a vehicle could find to do. The first thing he decided was that he needed to find a job that was nearby, and right across the street was the Grant Street Grocery store. Isaac figured that was a good a place to start as any, so he went over and asked for a job. I think the owner thought he was joking, and so he didn’t really take him seriously, but Isaac kept asking. Finally the owner said, “Well, 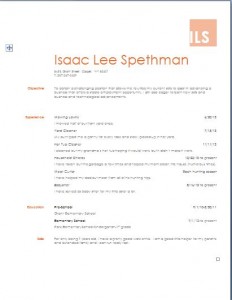 bring me your résumé.” Being a young man, he had no idea what that was all about, but his aunt, Liz Masterson is a teacher, so he knew exactly who to go to for information on it.

When Isaac approached Liz, he told her that he needed a résumé. Liz was a little confused, because you see Isaac was just a little young for a job…or so Liz thought. She explained that a résumé was a letter telling of your job history and work experience. Isaac insisted that he have one, so Liz wrote it up. On the résumé she listed things like playing well with his brothers, taking out the trash, making his bed and cleaning his room, as well as miscellaneous assistance for his mom and dad, and other chores. It wasn’t much of a work history but it would have to do, because this was going to be his first job.

Isaac was so proud of his résumé. He took it, headed straight over to Grant Street Grocery and handed it to them. I guess they finally understood that he really wanted the job, because they hired him on the spot. He even had to have work boots…a hard thing to find. Isaac did all kinds of work, from sweeping up to taking out the trash, and even learning about the cuts of meat. He 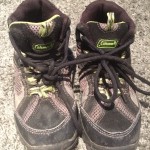 made a little bit of money each time he worked, but it wasn’t minimum wage, because you see Isaac was only six years old. It’s never too early to teach your children good work ethics, but in Isaac’s case, other than teaching him to do his chores, his parents didn’t really have to teach him anything, because he sort of taught himself. True, Jenny and Steve are hard working people, and leading by example is always the easiest way to teach people the right way, but who ever thought it would work so well with their young son, but it did, and Isaac now has his first job under his belt, even if it wasn’t for minimum wage, and the next time he needs a résumé, he will have one more job to add to it. Today is Isaac’s 8th birthday. Happy birthday Isaac!! Have a great day!! We love you bunches…now get back to work!!