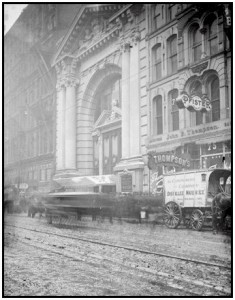 Every day, we benefit from safety measures that have been put in place as a result of a need, or more often a tragedy, that occurred in the past. We give very little thought to things like fire drills, earthquake drills, or even the fire extinguisher on the wall in buildings. We don’t normally think about the fire exit, unless we are looking for the way out of a building and find that this exit is only to be used in case of a fire. I suppose that the reason we don’t think of these things is that we expect the place we are in to be a safe place. There are regulations surrounding the public use of buildings that require that the building meet a certain standard of safety, and most often they do…these days anyway.

These safety lessons were not so pleasant to learn for those who came before us and who didn’t survive. Such was the case on December 30, 1903, when the Iroquois Theater in Chicago caught fire and killed 602 people, 572 inside the theater, with the rest dying of the injuries received in the fire. That total included 212 children. You see, the Iroquois Theater was hosting hundreds of adults and school children to a Holiday performance of a play starring the popular comedian, Eddie Foy. The sad thing is that the theater was thought to be fireproof. In reality it was a deathtrap, due to so many safety violations. As a result, the lives of many families were devastated. As I looked at the list of victims, I can’t say that I ran across any I knew to belong in my family tree, but I could be wrong on that too. My family and that of my husband, Bob, spent a lot of time in the Great 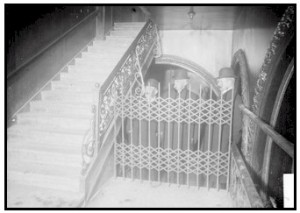 Lakes area, so it is entirely possible that my own family lost people due to this tragedy as well.

These days, our children think nothing of a fire alarm going off in school. They have several of them a year. when the alarm goes off, they simply follow their training and line up to leave the building. If there were a fire, they would most likely not know it until they were not allowed to go back into the building. Children in earthquake prone areas at taught exactly what to do if the room starts shaking, and they respond automatically, often saving their lives.

The problem with the Iroquois Theater fire, was as simple as the problem with the Titanic. People didn’t think the building could possible burn, or the ship sink. The Iroquois Theater was only open five weeks before it’s total destruction. As a result, lives were lost. In my reading of this tragedy, I found that while the architect wanted every possible safety measure taken, costs had been cut and therefore, the fireproof theater everyone thought they were in, simply did not exist. The theater was over crowded by 400 people, at 2,000 people in a theater designed to hold 1,600. They stairway to the fire escape hadn’t been finished yet. exit doors had been designed to be pulled open, and with the crowd of fear stricken people, the press was to much, and the escape, completely blocked. Iron gates closing off some of the stairways were locked, and people tried jumping out the window…to their deaths unfortunately. In some 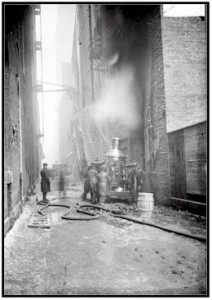 places the bodies were stacked 10 high with people attempting to crawl over each other to get out. In desperation the fire department set up a bridge of sorts to get people out. Some got out, some didn’t.

I don’t know why we humans always seem to think that something we build could be indestructible, when in reality, much of what we build is, in one way or another, flawed. I think that one of the best things we can do for our families, is to make sure they all know how to get out of a building safely. We can hope that the architect, contractor, workers, and inspectors all did their job properly, but we must remember that they are only human too, and mistakes can be made. If people know not to panic, they can get out safely more times than not, but panic…most often results in tragedy. And that is what happened in the Iroquois Theater in Chicago on December 30, 1903…panic and a complete disregard for the elementary rules of safety.