Different, And Yet Alike

For every girl named Amy, there comes a time when their name is butchered in one of the sweetest ways possible. It happens when a small child tries to say their name. I don’t quite understand why such a simple name is so hard for little ones to learn to say correctly. Nevertheless, the name Amy always seems to change to Mamie when said by a little one who is learning to talk. This has been something that my daughter, Amy Royce has had the pleasure of enjoying all her life. I suppose some people wouldn’t think it cute to have their name messed up in such a way, but we have always thought it to be really cute, and quite precious for our Amy to be called Mamie. It was always said by a child who dearly loved Amy, and that made the name quite endearing. And it was always fun to laugh about it, causing it to be a nickname that even the adults used with her sometimes.

Because of how much we loved the nickname, Mamie for our daughter, I found myself smiling when I heard what my cousin Raylynn Williams had named her daughter. The name was actually handed down from her husband’s grandmother, but nevertheless, there was now a Mayme whose name was not being mispronounced by the little children around her. As names go, it is a bit unusual, but then a lot of people prefer the unusual when it comes to naming their children, myself and my daughter Amy included.

I found myself taken back in time just over four years ago, when I heard what my cousin had named her precious little girl. The name would be one that would take me back every time I heard it…or even saw Mayme. How odd it seems, to have two children with names that, in reality, are not the same, but we can feel a sameness nevertheless. It isn’t always sameness that connects us, you see. Sometimes, it can be our differences that make us the same. While Amy and Mayme are totally different names, to hear a small child say them, would sound exactly the same. Who would expect that a shorter name that is totally different, would be pronounced the same when it comes to little kids. Mayme is a sweet little girl, with a beautiful smile, who is a little bit shy around people she doesn’t know well, But once she knows you are ok, based on being cleared by her parents, of course. Her face will light up with her smile. She is the answer to her parents prayers for a daughter, and the apple of their eyes. Her brothers are very protective of their little sister, as brothers tend to be…especially when the sister is the youngest, like Mayme is. 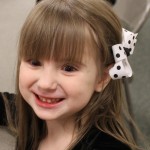 I can’t say that Amy and Mayme are alike in very many ways, in all reality, because Amy is a grown woman, and Mayme is a little girl. So much can change as each moves on in their life. Amy has always been a little shy, and I think Mayme is too, but that could change as she grows up…or it could stay the same. We will see. They may end up becoming completely different people, but one thing they will always have in common is their name…in a way anyway. Mayme will always be Mayme, even when her name is said by a little child, and Amy will always be Amy. But, Amy will also always be Mamie too, because there will always be little kids who will love Amy and will learn her name early, even if they do mispronounce it.