The Importance Of Lookout Mountain 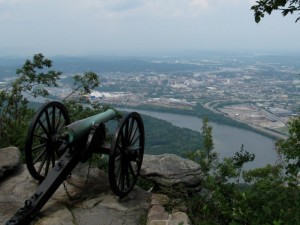 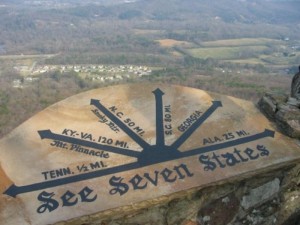 On a trip to Tennessee and the surrounding area in April of 2003, Bob and I had the opportunity to visit Lookout Mountain, which is located near Chattanooga, in southwestern Tennessee. The drive up was stunning, and everything we saw there from Ruby Falls, to the Incline Railway, and Rock City proved to hold amazing views as well. From the top of the mountain, you can see seven states…Tennessee, Kentucky, North Carolina, South Carolina, Virginia, Georgia, and Alabama. The view across that area is spectacular. When we travel, we love to go sight seeing, so this area fit right into our idea of a great place to visit. looking back now, I’m sure that time constraints played a part in my missing out on some of the amazing historical value of the area I was visiting, and to me, that is really a shame, because so much took place there, and I didn’t even know it.

I suppose I should have known the history of the area, but apparently I wasn’t as up on my Civil War and Indian history as I am now. I really wish I had known or had at least taken more time reading the many signs in the area, because I could have figured out what a great area we were in. During the Nickajack Expedition which occurred in the 18th century, Lookout Mountain would become a last stand for the Chickamauga Cherokee, who were followers of Chief Dragging Canoe, who opposed the peace treaty between Native Americans and the American settlers. The peace treaty was signed in 1777. Most of the Chickamauga Cherokee agreed to the treaty, but a small band followed Chief Dragging Canoe, and they went to battle in the late summer through the fall of 1794. The final battle, and the point that Chief Dragging Canoe’s warriors would lose the fight took place on Lookout Mountain. The Indians were no match for the military might of the army, and after wounding only 3 of the militia, the villages of Nickajack Town and Running Water Town were destroyed, leaving seventy Cherokee dead.

The Civil War battle that made Lookout mountain famous took place on November 24, 1863 and was a part of the Chattanooga Campaign. Major General Joseph Hooker defeated the Confederate forces who were under the command of Major General Carter Stevenson. Lookout mountain has an excellent view of the Tennessee River, making it a perfect stronghold. It also held a perfect view of the Union supply lines, so if the Confederate army wanted to starve out the Union army, they needed Lookout Mountain, and if the Union army wanted to keep their supply lines clear, they needed Lookout Mountain. One of the hardest places to fight a battle is a mountain…at least for the side who is at the bottom of the mountain. They are far too visible to fight the battle easily. So, after calling for reinforcements, Major General Joseph Hooker went into battle. It was a must win situation. If they lost the Union soldiers would be starved into surrender.

Looking back now on our visit makes everything we saw seem much more interesting. In my memory files, I can pull out the different views of our visit to Lookout Mountain, and I can visualize the exact view the Confederate soldiers had, and knowing that there was virtually no place to hide, I can’t help but wonder how the Union soldiers managed to win that battle. I suppose that it was partly the numbers of soldiers, with 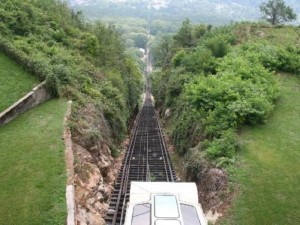 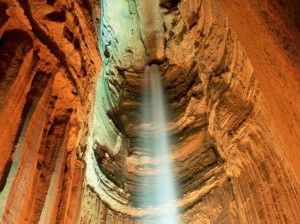 the Union having more than 1,000 more, but more importantly, I think it was the fact that they surrounded the Confederate soldiers, leaving them with too many sides to cover. Our trip to Lookout Mountain, Ruby Falls, and Rock City has taken on a whole new meaning for me. I wish I had known it then. I would have really enjoyed that stroll through history. The great thing is that my pictures, memories, and a little look at history can take me back to visit again.

4 Responses to The Importance Of Lookout Mountain