Shoot Out At The Nursing Home

When Bob and I arrived at the nursing home where his mother lives, she immediately asked us if we had our guns. We usually go with the flow when talking to her, because with Alzheimer’s Disease, you just never know what she will say. She gets an idea into her head, and she goes with it. Things like telling us she cooked dinner, or asking what time she has to be to school are common topics, but she hasn’t talked about guns very much, so I wasn’t really sure what direction this conversation was going to take. When I told her we didn’t have our guns, she gave me a sideways glance, and I knew this was a serious conversation. She then told me that when “those guys” get here, we are going to start shooting at them. I told her that it was against the law to shoot at people, and she informed me that it wasn’t if they shot at us first. You just can’t argue with that logic, so we tried to change the subject. She was having none of it. 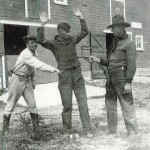 that when the shooting started…it was going to be really bad. It was very clear to me that she was anticipating a real shoot out. It isn’t very often that she is impossible to move off of a conversation and on to something else, so we knew that we were going to have to play this one out. I told her that no one told us that we were supposed to bring our gun, and once again, I received a sideways glance that told me that she really did not approve of our severe lack of preparation for this upcoming battle. I’m not sure how I was supposed to know that we needed to bring our gun, but I can say that since she had informed us that “the boys” called and told her about “those guys” who were coming to have this shoot out, It seems to me that she had a definite advantage over us. If “the boys” took the time to call her, maybe they should have called us too, since it was to be our job to protect Mom from “those guys” after all. Shouldn’t we have been told this responsibility was coming before “those guys” were on their way…with guns!!

When we took Mom into the dining room for dinner…again trying to get her mind off of the upcoming battle, she still would not be moved. She made Bob close the blinds in the room, in case “those guys” showed up 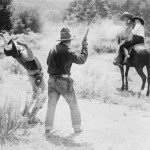 before she was done eating. When Bob told her that he was pretty sure they wouldn’t be there before we could get done, she didn’t look very convinced. Bob had to tell her that as soon as she was done eating, we would go out of the dining room and sit in a room with no windows, so she would be safe. She ate her dinner quickly and without any arguments, and when she was done, we went into the TV room. We were sure that it was a protected room without any problems, but she immediately noticed that the blinds across that room were open too, so we had to close those as well. We assured her that she was safe now. Then she said that pretty soon, they would be getting ready to call out the numbers. Suddenly, it became crystal clear that the shoot out was over, and…we were on to Bingo.

7 Responses to Shoot Out At The Nursing Home