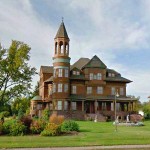 While in Superior, Wisconsin in late August, we drove by a beautiful home, called the Fairlawn Mansion. I have always been intrigued by mansions. It isn’t that I would like to live in one necessarily, but I very much enjoy going through them. We didn’t have time to go through this one, unfortunately, so I have been doing some research on it. My research has helped to tie a couple of things together for me about my hometown. I was born in Superior, but that doesn’t necessarily mean that I know a lot about the history there…especially since we moved when I was three years old. I never knew who the mayors were for instance, or why some of the places were named what they are.

I knew about Pattison Park, but never knew how it got it’s name. It was named after Superior’s three time mayor, Martin Pattison. He was a lumber and mining baron, and he built the Fairlawn Mansion as the family home for himself, his wife and their six children. Construction began in 1889 and was completed in 1891. It is known as one of America’s castles, and it definitely looks the part. It is a 42 room mansion with a four story turret complete with a widow’s watch overlooking the bay at the tip of Lake Superior. The cost of building the mansion was $150,000 at that time, which is equivalent to well over $3,000,000 today. The grounds are adorned with several gardens filled with flowers in the summertime.

The family lived in the home until Martin’s passing in 1918, and the home sat vacant until 1920. From 1920 to 1962, this mansion served as a children’s home and house for the less fortunate. To me that seems a bit odd. Not that the house would be used in this manner, but that the people who benefitted from it’s use in those days would be called less fortunate…since they did have an amazing home to live in. Of course, if they were orphaned, they would be less fortunate. Nevertheless, they had an amazing house to live in. I can imagine that if those walls could talk, they would have many stories of the laughter of children to tell, because the mansion housed over 2000 children during it’s 42 years as a children’s home.

There are always a few ghost stories associated with mansions, it seems, and this mansion is no exception. It is said that a former maid, who was later killed by her husband and a little girl who supposedly drowned in the pool both haunt the mansion to this day, but I don’t believe in ghosts, so I say that only in passing, since it is a story connected to this beautiful house. Neither of these accounts can be substantiated, and there is no record of anyone dying there. I’m not sure why it is always the mansions that seem to carry the haunted status, because quite likely every older home and even many of the newer ones have had a resident die in them, and I’m sure quite a few of the deaths involved murder, but you just never hear of ghosts 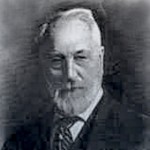 haunting those places. Maybe the story just doesn’t fit in with a dinky little house.

Rather than the supposed ghosts a mansion might have, I prefer to think of the happy times the mansion got to see over the years. These days the house is a museum, and hosts many weddings. I can imagine that the ballroom would be fabulous, and such a romantic place to have a wedding party. If the couple planned it right, theirs could be a replica of a traditional high society wedding of days gone by. I would imaging that if these walls could talk, we could hear stories of beautiful gowns, elegant people, and beautiful music. This mansion has such a unique history, that I would really love to sit and hear all it one day, because the stories would have to be simply amazing.