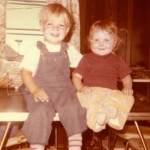 I find it amusing when little kids are, for lack of a better word, attracted to each other. It isn’t a sexual thing, but rather a friendship. Nevertheless, they know who they like and they aren’t afraid to show it. You might see two little kids kissing or holding hands. They don’t feel self conscious, they just know that they like each other.

That’s the way it was when my sister-in-law, Jennifer was babysitting a couple of kids the summer she was 15 and since we lived next door at the time, my daughters, Corrie and Amy were over there a lot too. Jay Dee, the little boy Jennifer was babysitting took a shine to Corrie. He decided that she was his girlfriend…sorry Kevin, this was before your time, and I don’t think Jay Dee cared anyway.

The kids played together all the time that summer, and got to be really good friends. I don’t recall if they did any kissing or not, but they did hold hands, and as you can see, Jay Dee put his arm around Corrie. Ahh…young romance.

Of course, Corrie’s young romance didn’t turn out the way her Grandma and Grandpa Schulenberg’s did. They met when he was 4 and she was 2 and theirs ended up being a forever kind of love. Corrie would go on to meet Kevin before deciding that he was the one, and I have no idea who Jay Dee married. Theirs was just a passing kid kind of young romance.

Whatever happens in those little kid or even baby young romance situations, it’s not really about any kind of real romance, it’s just about learning to express their feelings. It’s about them making their own decisions on who they like and don’t like. Kids are brutally honest about their feelings…good or bad, and sometimes that can be problematic, because while they are very willing to show how much they like other kids, they are also very willing to show that they don’t, and as I recall there was just as much fighting between those two kids as there was romance. Maybe that’s why Corrie married Kevin instead.